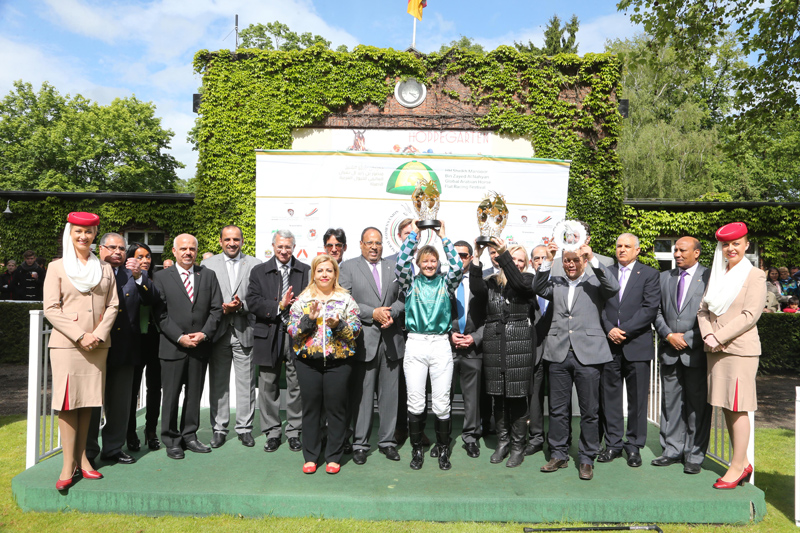 Berlin- Germany – Top Dutch lady jockey Jadey Pletrasiewicz made every step a winning one onboard Phraseur Kosack to land the seventh round of the HH Sheikha Fatima bint Mubarak Ladies World Championship IFAHR at the Hoppegarten Racecourse here on Sunday evening.

“It’s a race to remember,” said the 30-year-old home care nurse. “I knew the Japanese lady was favourite to win the race with Athlete del Sol, but I was confident that it was my turn to book a dream lineup in the grand final of the competition in Abu Dhabi next November,” she added.

The race was held among high expectations that the Japanese professional jockey Mai Beppu will be hard to beat, but the run of the race came contrary to all speculations.

“I know the trainer Huub Otermans and she has told me that Phraseur Kosack is in his best form and would be suited with soft underfoot following the rain showers which hit the venue in the afternoon. Her instructions are to settle behind the early pace and put the horse on top gear at the home turn, and that what has happened. My mount showed his stamina and stayed on very strongly to lead by four lengths close home,” she added.

However, Pietrasiewic has joined hands with Otermans last year to land the Sheikh Zayed Cup ‘Listed’ at the same venue with Poulain Kossack.

Trained by JM Wolters at the Stall Lucky Stables in Holland, the five-year-old son of Amer was always going well before the rider said go to do all the work in the straight and prevails by more than three lengths on the line.

Jumaa Mubarak Al Junaibi, UAE ambassador to Germany praised the strong support which is received by the sports sector in the UAE saying that it underlines the keenness of the wise leadership of His Highness the President Sheikh Khalifa bin Zayed Al Nahyan and his brother His Highness Sheikh Mohammed bin Rashid Al Maktoum, UAE Vice-President and Prime Minister and Ruler of Dubai and General Sheikh Mohammed bin Zayed Al Nahyan, Crown Prince of Abu Dhabi, Deputy Supreme Commander of the UAE Armed Forces coupled with the role which is played by Sheikh Mansoor bin Zayed Al Nahyan, UAE Deputy Prime Minister and Minister of Presidential Affairs to promote sports in general and Arabian horse races in particular.

Lara Sawaya, director of the HH Sheikh Mansoor bin Zayed Al Nahyan Global Arabian Horse Flat Racing Festival and chairman of the Ladies Racing Committee in the International Federation of Arabian Horse Racing Authority (IFAHR) said: “Under the directives of HH Sheikh Mansoor bin Zayed Al Nahyan, we are delighted to return to this beautiful venue which attracts a big crowd to its well-organised events. The races of the festival are growing bigger and bigger with every move. Last time, we have attracted new lady jockies from South Korea and Morocco for the first time and now we have riders from Japan and Tunisia while plans are underway to have new lady jockey from India.”

Sawaya thanked the management of the Hoppegarten Racecourse noting that it’s one of the best venues around the globe to host the events of the festival which are receiving the respect and encouragement of the spectators.

“I would like also to thank all their excellences the ambassadors of the Arab countries who have joined us at the Hoppegarten,” she said.