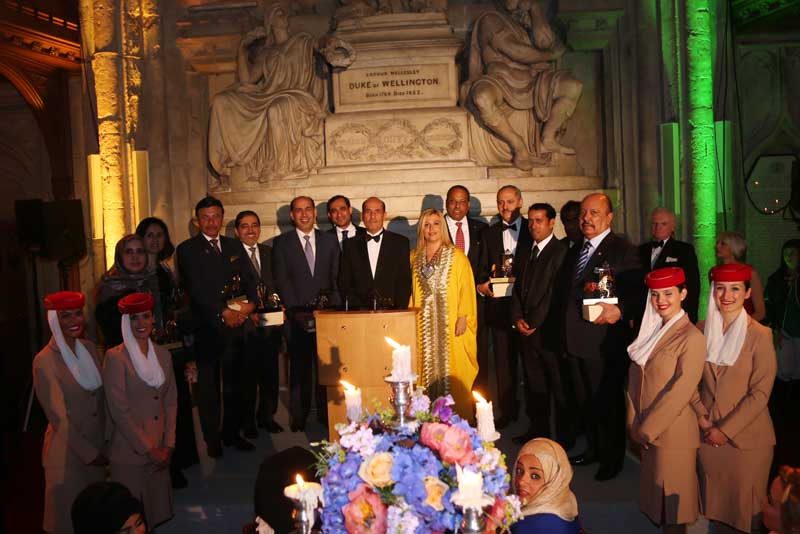 Over 350 delegates assembled at the prestigious venue to kick start a five-day programme which includes three days of seminars, an endurance ride and two flat races, all under the umbrella of the HH Sheikh Mansoor Bin Zayed Al Nahyan Global Arabian Horse Flat Racing Festival.

His Highness Sheikh Mansoor bin Zayed Al Nahyan, UAE’s Deputy Prime Minister and Minister of Presidential Affairs in his message for the conference said, “Now we are in the fifth edition and it certainly has been a journey that has not only brought together all sections of the Purebred Arabian fraternity onto one platform but has also thrust into focus many issues and obstacles in the progress path of Purebred Arabian racing.”

“The Festival believes that discussing and exchanging ideas is the only way forward for the sport of Purebred Arabian racing and the Fifth World Arabian Racing Conference in London will certainly be another positive addition to this march,” he said.

HE Abdulrahman Al Mutawee, UAE ambassador welcomed the delegates and said, “We are happy that there are representatives from 32 countries and over 55 speakers at the seminars over the next three days. This is a significant event and we are glad that it is being staged here in London which is a prominent centre for horse racing.”

Sami Al Boueinen, Chairman of IFAHR hailed the conference and said, “Ten years ago IFAHR consisted of amateurs but since the support of His Highness Sheikh Mansoor bin Zayed Al Nahyan, UAE’s Deputy Prime Minister and Minister of Presidential Affairs and Her Highness Sheikha Fatima bint Mubarak, Chairwoman of the General Women’s Union, Supreme President of the Family Development Foundation (FDF) and Head of the Supreme Council for Motherhood and Childhood, both IFAHR and Arabian horse racing has received a huge boost.”

“The HH Sheikh Mansoor bin Zayed Al Nahyan Global Arabian Horse Flat Racing Festival’s World Arabian Racing Conference has served as a huge boost for women involved in Purebred Arabian racing. Every edition of the Conference has had a topic concerning women in Arabian racing and with the fifth successive event now set for London we hope it will be another event of success,” said Noura Al Suwaidi, Director General of the UAE General Women’s Association.

Commenting on the progress of Purebred Arabian racing, Ms Lara Sawaya, Executive Director of the HH Sheikh Mansoor bin Zayed Al Nahyan Global Arabian Horse Flat Racing Festival and Chairman of Ladies Racing at the International Federation of Arabian Horse Racing Authorities (IFAHR), said “We are happy to announce that a Korean lady jockey won a race and in this week’s race we also have a Japanese lady rider taking part.”

“We started on a small note in 2009 but today we have 94 races scheduled for 2014 and that has triggered tremendous Commenting on the progress of Purebred Arabian racing, “ Ms Sawaya said.

Genny Hanes, chief of the Arabian Racing Organisation said, “The conference is a great initiative and we hope the vast experience and knowledge shared here will help the sport go forward.

Sheikh Hamdan bin Surour Al Sharqi representing Invest AD said they were honoured to be part of the festival while Nabil Al Zarouni of TCA Abu Dhabi said, “For us this has been a priority event as it deals with the UAE’s culture and heritage.”