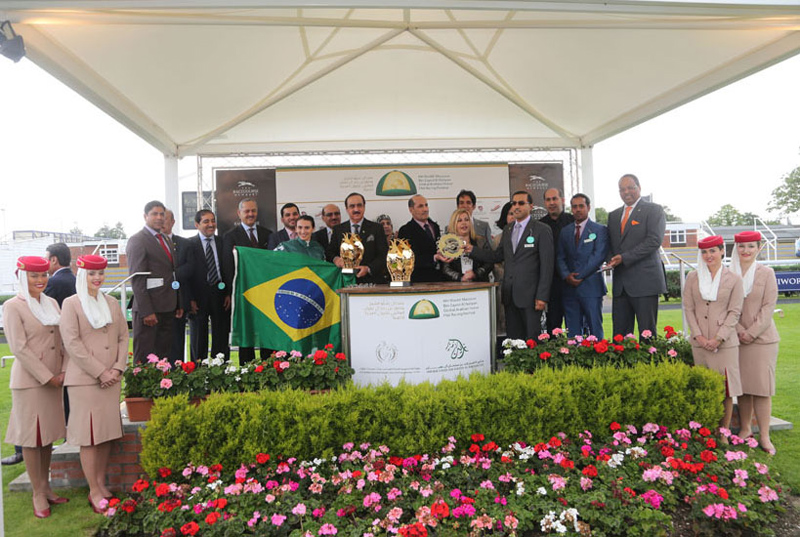 Brazilian professional lady jockey Jeane Alves teamed up with Omani trainer Salem Al Hakamani to ease Marif home and make it a winning debut in the 8th round of the HH Sheikha Fatima bint Mubarak Ladies World Championship as the Omani horses swept the two Arabian races on the card at The Course Newbury here on Saturday.

In the 6th round of the Sheikh Zayed bin Sultan Al Nahyan Cup (Listed), top weight Djet Taouy came full of running under David Michaux to reverse places with earlier conqueror Nashmi in the distinguished colours of the Royal Cavalry of Oman.

“It’s a national pride for me to fly my country’s flag in this most prestigious championship in which lady jockeys from all over the world compete. I hope to repeat in the final in Abu Dhabi when I make my first trip to the Middle East in November,” said a jubilant Latin American lady after completing her 451 wins in 25o1 starts.

“I have stuck to the instructions of the trainer Salem Al Hakamani who told me to hold my mount early on before making a forward move to hit the front in the concluding stages. Luckily, Marif has picked up nicely and held on courageously when he was attacked by Sophia in the hands of the British jockey Page Fuller who tried to run him down close home,” she said.

“This is my first success on the back of an Arabian horse. I have finished second and third on two occasions back home in Brazil,” she added.

The winner covered the seven furlongs distance in 1,39,45 seconds to prevail by a length and a quarter on the line with the Moroccan lady Marmoul Bouchra a head behind in third place aboard Suhaim on a good to soft ground.

Lara Sawaya, executive director of the HH Sheikh Mansoor bin Zayed Al Nahyan Global Arabian Horse Flat Racing Festival and chairman of Ladies Racing at the International Federation of Arabian Horse Racing Authorities (IFAHR) was excited and said: “This is the strongest field in the championship and I’m truly happy for the Brazilian jockey who has travelled all this way to show the magic of the Samba girls. It’s once again a great ride by the Moroccan lady Bouchra to take third in this competitive race.”

In the meantime, Djet Taouy got off the mark to win hands and heels under the French jockey David Michaux in the Shaikh Zayed bin Sultan Al Nahyan Cup (listed) the second Arabian contest on the card which was run over a mile and a quarter to the delight of his boss Jean Bernard.

“It’s a well-deserved victory for the brilliant performer and for the man on board who gave him all assist to show the best of him,” Bernard said later. “Djet Taouy recaptured his true form and image as a a top class horse. His obvious target is the World Cup in Longchamp on the Arc Day in October, but big races at Newbury, Deauville and Chantilly are also on the agenda,” he said.

The winner travelled nicely to clock 2.26.20 seconds and lead by a length and a quarter to the run of the judge on a soft ground. Nashmi, ridden by Pierantonio Convertino chased the winner home and behind them came the mount of Shane Kelly, Shadyia.