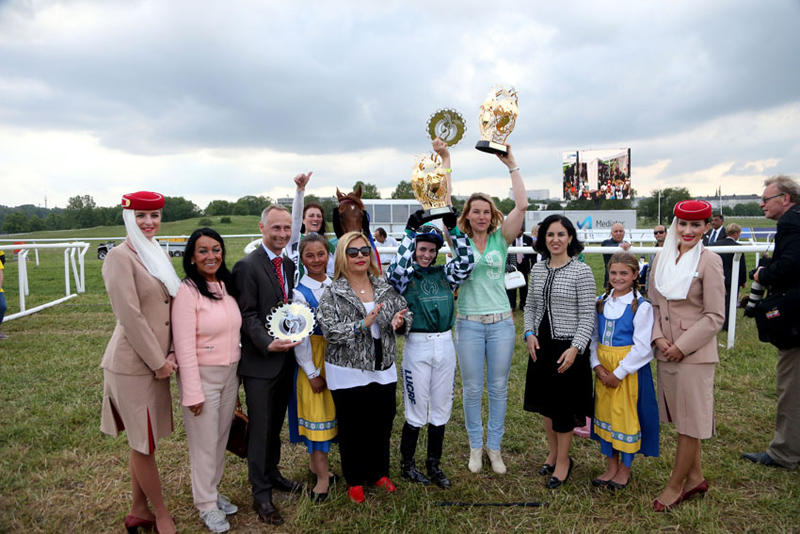 It was a Miss Karen van den Bos show in the HH Sheikh Mansoor Bin Zayed Al Nahyan Global Arabian Horse Flat Racing Festival as the Dutch trainer celebrated with a double as thousands of Swedes marked their National Day at the Gardet in the Royal National City Park in Stockholm city.

A jubilant van den Bos hailed Alibaba Del Sol, the 9-year-old having also won on the frozen ‘White Turf’ ice track in St Moritz in Switzerland earlier this year. “My horses were in great condition and Alibaba Del Sol at nine still wants to run, wants to win. It has been tough for them, travelling for over three days to come here but they were just superb and we enjoyed racing in front of this record crowd,” van den Bos said.

“This is the first time I have ever ridden an Arabian horse and it was such a pleasing experience with the win making it a memorable series debut,” said the 33-year-old Freeman-Key, who notched her 401st winner.

“I am super excited to having clinched a berth in the Abu Dhabi finale and I am looking forward to that race,” said the Australian, who has also raced and won in Macau and South Africa.

HE Sheikha Najla Al Qassimi, the UAE Ambassador to Sweden attended the races and gave away the trophies to the winners.

“This race meeting has been remarkable and the largest audience ever to watch a Purebred Arabian race here in Sweden. This success is testimonial to the huge interest that the of HH Sheikh Mansoor bin Zayed Al Nahyan Global Arabian Horse Flat Racing Festival has been attracting in all races, wherever they are held,” HE Sheikha Najla Al Qassimi said.

“With the participation of the Canadian lady jockey Janine Ellen Smith, the number of countries that have taken part in our ground-breaking H.H. Sheikha Fatima Bint Mubarak Ladies World Championship IFAHR race series for lady jockeys has now reached 54. This truly reflects the success of the series as well as the Festival,” Ms Sawaya added.

The Festival’s next stop will be in the Netherlands on June 22.