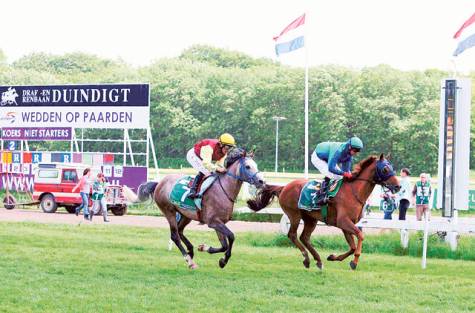 The HH Sheikh Mansoor Bin Zayed Al Nahyan Global Arabian Horse Flat Racing Festival’s two races at the Duindigt race course here in The Netherlands promises exciting contests as some of the top Purebred Arabian horses are in the fray.

The veteran star from van den Bos’ yard started with a win on the ‘White Turf’ – the ice track on the frozen St Moritz lake in Switzerland earlier this year and Alibaba Del Sol again visited the winner’s enclosure with a thumping win in Stockholm just a fortnight ago.

Alibaba Del Sol will be ridden by Hungary’s Alexandra Jan in the 2150-metres turf contest. Sartejano under Sweden’s Kathalie Johnsson will be a strong contender while all the other lady jockeys will be looking to clinch a berth in the Abu Dhabi finale of the HH Sheikha Fatima Bint Mubarak Al Nahyan IFAHR Ladies World Championship race to be held later this year.

The Group 3 Sheikh Zayed Bin Sultan Al Nahyan Cup contest is a mouth-watering clash between the horses that finished 1-2 here last year as well as a handful of other strong contenders. Ameretto and Poulain Kossack won in that order here in Duindigt last year and both are multi-race winners in the Festival.

Nahee in the colours of HH Sheikh Mansoor Bin Zayed Al Nahyan, UAE Deputy Prime Minister and Minister of Presidential Affairs from trainer Jean Pierre Totain’s yard is the winner of the HH Sheikha Fatima race in Toulouse and will be one of the favourites and so will Qatar raider No Problem Al Maury. The Jean-Francois Bernard-trained No Problem Al Maury won the Sheikh Zayed Bin Sultan Al Nahyan Cup in Ostend, Belgium last year and is a globe-trotter with some creditable runs in the USA, Turkey, Qatar and France.

Poulain Kossack, the Dutch champion in 2009 and 2012 is back again while Gazel T, third in Stockholm a fortnight ago and Phraseur Kossack – another Sheikha Fatima Cup winner – all add spice to the contest.

A large crowd is expected as the two Festival races are all set to thrill the racing fans here. Also on the card is the Derek Thompson Arabian Sprint, a race named after one of the world’s top racing commentator Derek Thompson who has now become the face of Purebred Arabian racing thanks to the HH Sheikh Mansoor Bin Zayed Al Nahyan Global Arabian Horse Flat Racing Festival.

Ms Lara Sawaya, Executive Director of HH Sheikh Mansoor bin Zayed Al Nahyan Global Arabian Horse Flat Racing Festival and Chairman of Ladies Racing at the International Federation of Arabian Horse Racing Authorities (IFAHR) said, “The field of runners in the two races is one of the best and you cannot ask for a more star-filled card in Purebred Arabian racing.”

“This reflects the success of the Festival and we are happy that the efforts of His Highness Sheikh Mansoor bin Zayed Al Nahyan, Deputy Prime Minister of the UAE and Minister of Presidential Affairs and Her Highness Sheikha Fatima Bint Mubarak, Mother of the UAE, Chairperson of the General Women’s Union, Supreme Chairperson of the Family Development Foundation and Chairwoman of the Supreme Council for Motherhood and Childhood are paying off.”

Mercier shows no mercy on rivals