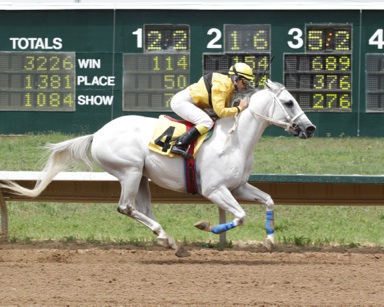 Aurora, CO (June 22, 2014) – Sammy V went straight to the front and never looked back to win Sunday’s COBRA Sprint at Arapahoe Park. The speedy gray horse with a similar name to his owner, Sam Vasquez, built a quick two-length lead at the end of a quarter-mile and held on for a 1 1/2-length victory over Ms Dixie in the Grade 3, $20,000 stakes race in 1:18.07 for 6 furlongs.

“Any time that horse takes the lead, you’re pretty confident he can go on ahead and win,” trainer Renee Lafleur said about Sammy V. “Dixie was coming. She gave it a good shot.”

Lafleur said that Sammy V will next travel to Northern California to defend his title in the Grade 2 Sheikh Zayed Bin Sultan Al Nahyan Cup at Pleasanton on July 5. After winning that race last year, Sammy V was away from the races for 10 months before returning in a fast allowance win at Arapahoe Park on May 31 prior to the COBRA Sprint.

“He’s training 100 percent better than he was before, and he’s 100 percent sound,” Lafleur said. “I think this is going to the year for him.”

Trainer Scott Powell, who owns Ms Dixie as part of the Quarter Moon Ranch with his wife, Lori Long, said that the 6-year-old gray mare will also travel to Pleasanton to compete in the Sheikha Fatima Bint Mubarak Ladies World Championship IFAHR Stakes on July 5. Both stakes races at Pleasanton are part of the HH Sheikh Mansoor Bin Zayed Al Nahyan Global Arabian Horse Flat Racing Festival. Arapahoe Park will host the Wathba Stud Farm Cup as part of the series on July 5.

Sammy V, the 1-2 favorite in Sunday’s field of seven, and Ms Dixie, the 5-2 second choice, were 9 3/4 lengths ahead of third-place finisher Djets Son and jockey Dennis Collins in the COBRA Sprint.

Khaleej Times: All set for Arabian horse race meeting Down Under