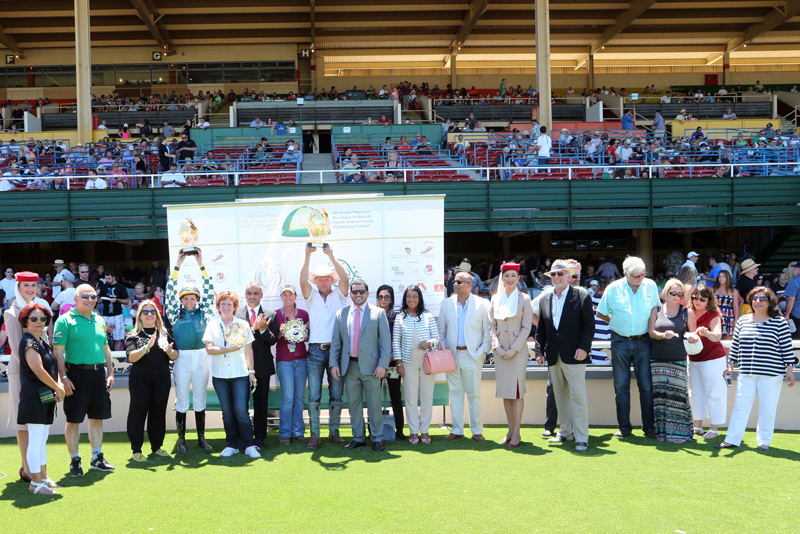 In an exhilarating display of raw speed, 6-year-old Sammy V under Juan Sanchez, smashed the record for a 6-furlong (1200 metres) race in the US and also registered one of the biggest margin of victories with a 13-length win in the HH Sheikh Mansoor bin Zayed Al Nahyan Global Arabian Horse Flat Racing Festival’s Sheikh Zayed bin Sultan Al Nahyan Cup (Grade 3) in Pleasanton, California on Saturday.

In the Festival’s second race of the afternoon in front of a huge holiday crowd, Ms Dixie was equally impressive with a three-length win in the HH Sheikha Fatima Bint Mubarak Ladies World Championship IFAHR Stakes.

In the third event of the Festival in the US, which was held in Arapahoe Park in Colorado, Zvezda was ridden to a convincing win by Travis Wales to win the Wathba Stud Farm Cup. Zvezda led from gate-to-wire to win the 6-furlong maiden for fillies and mares by two lengths in 1:20.60.

With the US celebrating its Independence Day with a series of fireworks display on Friday midnight, it was Sammy V that continued the fireworks with a blazing run on one of the oldest dirt courses in the US in Pleasanton.

After winning the Sheikh Zayed bin Sultan Al Nahyan Cup last year, the a 6-year-old gray horse named for owner Sam Vasquez, was reunited with Juan Sanchez and it was a powerful run from pillar to post in 1 min 15.99 seconds, bettering his own mark of 1:17.54 set last year and the new mark is the fastest in the US since 1976.

Ayers and By Golly Its Hot ran second and third but Sammy V’s run decimated the 8-horse field and winning jockey Sanchez said, “I was riding him after a year and he is one of the best Purebred Arabians I have ever ridden. In fact it feels like you are racing on a Thoroughbred, he is super fast.”

In the HH Sheikha Fatima Bint Mubarak Ladies World Championship IFAHR Stakes race, Ms Dixie under Italian jockey Giada Menato battled My Vaz Is Hot at the top of the stretch and pulled away to finish first past the post.

“This is only the second time I am riding a Purebred Arabian but the trainer told me she will win and just asked me to keep her in front. The start was not very good but on the home stretch she showed her class and now I am so excited that I will be part of the HH Sheikha Fatima Bint Mubarak Ladies World Championship IFAHR final race in Abu Dhabi on November 9,” the 23-year-old Milan-born Menato said.

The UAE envoy Al Saboosi hailed the success of the Festival and said, “This race series has now become synonymous with Purebred Arabian racing in the US and it augurs well for the strong relationship between the US and the UAE.”

“We will now concentrate on our preparation for the new series that will be part of the Festival – the H.H. Sheikha Fatima Bint Mubarak Apprentice World Championship (IFAHR). We will be staging five races open only to Apprentice jockeys, starting with the first in Sacramento in the US on July 19 and culminating in the final one in Abu Dhabi on November 9, 2014,” she announced.

“Thanks to Her Highness Sheikha Fatima bint Mubarak, Chairwoman of the General Women’s Union, Supreme President of the Family Development Foundation and Head of the Supreme Council for Motherhood and Childhood and Mother of the World, this race series will also visit Newbury in the UK on August 3, Baden Baden in Germany on September 7 and Tarbes, France on October 12,” she said.

Promising and talented Ahmad Al Saboosi will represent the UAE in this five-race series, she added.