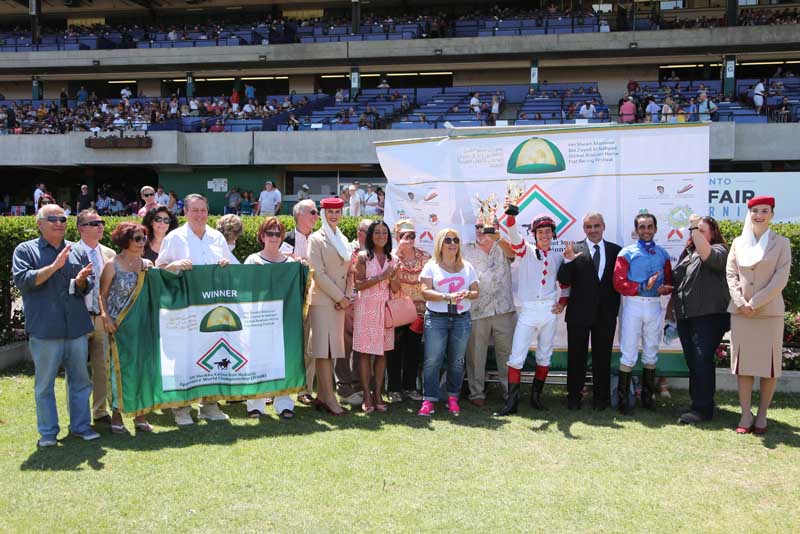 It was another record-breaking run by America’s top Purebred Arabian Sammy V and this time it was Italian jockey Gianluca Sanna on board to clinch a memorable win in the opening leg of the first-ever HH Sheikha Fatima Bint Mubarak Apprentice Jockey Championship race.

A large crowd in Sacramento watched as the 2008 colt by Burning Sand out of Heaven Kan Wait and trained by Ken Danyluk, registered his 9th win in 14 starts and remained unbeaten in 2014.

Saturday’s race was the start of a new series by the HH Sheikh Mansoor bin Zayed Al Nahyan Global Arabian Horse Flat Racing Festival and 10 apprentice jockeys from around the world lined up for the 6-furlong dirt contest.

It was Limitless that jumped early but soon Sammy V was off, widening his lead to 10 lengths before the 1/4 pole. Once on the home turn there was only one winner as Sammy V rewrote the record in Sacramento with the winning time of 1:17:40.

Helen Shelley’s Ayers under Gamma Tutty from Great Britain finished ahead of In X Hess with Ireland’s Laura Barry on board while USA rider, Laura Carson brought in Limitless in fourth place.

An overjoyed Sanna said that owner, Sam Vasquez, had asked him before the race, “Can you stay on? If you can do that, you’ll win!”

Winning owner Vasquez said, “This was a great win. We are heading in the right direction here with the support by the HH Sheikh Mansoor group. If this does not motivate Arabian owners to breed and race, I don’t know what will.”

“It is simply amazing to see how this HH Sheikh Mansoor bin Zayed Al Nahyan Global Arabian Horse Flat Racing Festival has been gaining in stature every year. The future of Purebred Arabian racing is in capable hands,” remarked HE Al Saboosi.

Ms Sawaya said, “The inaugural race of the H.H. Sheikha Fatima Bint Mubarak Apprentice World Championship (IFAHR) series got off to a fantastic start here in Sacramento with the favourite Sammy V recording another majestic victory.”

“To make it more competitive e have now announced a bonus of Euros 30,000 to be shared by the top five winners in the five race series. Remaining races are in Newbury, UK, on August 3, Baden-Baden, Germany, on September 7, and Tarbes in France on October 12. The series finale will be November 9 in Abu Dhabi,” Ms Sawaya said.

“We will be back in the US for the Sheikh Zayed bin Sultan Al Nahyan Cup, a race with approximately $45,000 added prize money, which will be held in September at Los Alamitos, the original home of Arabian racing in California,” she said.

“We will also stage a Triple Jewel (Triple Crown) in 2015 to boost the Festival’s presence in the US. This Triple Jewel will offer a total of US$ 150,000 and will comprise of races in Houston, Texas (Amethyst), Pleasanton, California (Emerald Green), and Los Alamitos, California (Diamond). Horses will gain points based on their finish in each of the three races and the one with most points will collect the bonus,” Ms Sawaya added.