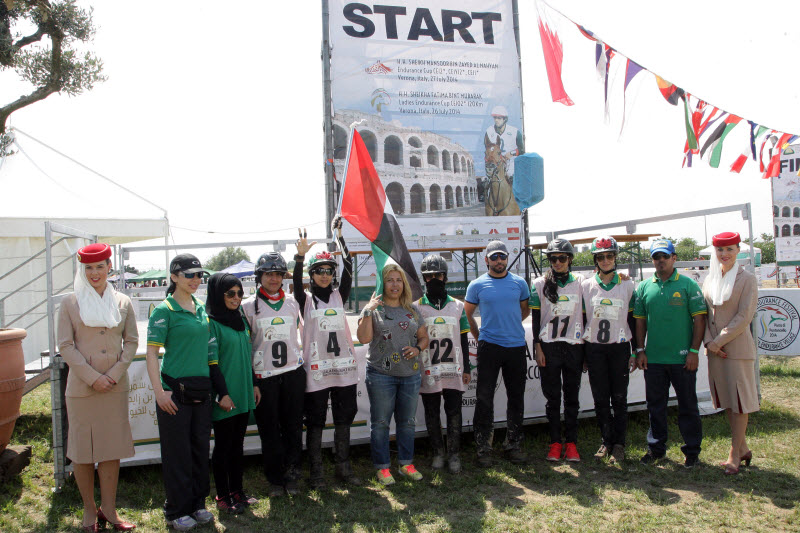 Led by a dominant display by UAE’s Afra Khalifa Al Suwaidi on Rivergum Drifter took the individual gold while the UAE’s Aya Abdulla Redha on Quersick Niellans took the bronze, the Emirati girls established their supremacy both in the individual as well as the team categories.

With Alia Al Khafajy on Exclusiva finishing sixth the three riders totalled 16 hrs 18 mins and 26 seconds for the 120-km event to snatch the team gold. Ayesha Al Romaithi on TRA Clica finished 18th while the fifth member of the UAE team, Shathra Al Hajjaj on Eros was eliminated after the third stage as her horse went lame.

Double gold-medallist Afra, a 26-year-old multi-ride winner in the UAE, said it was her biggest career win. A Research and Analysis Assistant at the Al Ain Municipality, Afra said, “We came here determined to win. My horse’s trainer Yousef Ahmed Al Baloushi told me he is a good hope and I just kept him in front. The pouring rain made it very difficult in the early stages but we managed to achieve a great win.”

Aya was unfortunate as she was overtaken with about five kms left by Bahrain’s Shaikha Najla but her third place effort helped the team garner the gold.

Al Baloushi, trainer of the winning horse Rivergum Drifter said, “He has gradually improved with a 5thplace, a third place, a second place and now a winning finish. Afra also rode a great race in tough conditions.”

HE Noora Al Suwaidi, Secretary General, UAE General Women’s Union and Chairman of the UAE Women’s Sports Committee said, “This is a great result for the region with the top six spots going to the UAE and Bahrain riders. A golden double by the UAE girls is a pleasing result considering the efforts and support of Her Highness Sheikha Fatima bint Mubarak, Chairwoman of the General Women’s Union, Supreme President of the Family Development Foundation (FDF) and Head of the Supreme Council for Motherhood and Childhood for women all over the globe.”

“The 5-member UAE ladies team was nursed and supported by His Highness Sheikh Mansoor bin Zayed Al Nahyan, UAE’s Deputy Prime Minister and Minister of Presidential Affairs and inspired by Her Highness Sheikha Fatima bint Mubarak, Chairwoman of the General Women’s Union, Supreme President of the Family Development Foundation (FDF) and Head of the Supreme Council for Motherhood and Childhood and Mother of the world and this double triumph has reflected the success of the wise initiative,” said Ms Lara Sawaya, Executive Director of the HH Sheikh Mansoor bin Zayed Al Nahyan Global Arabian Horse Flat Racing Festival and Chairman of Ladies Racing at the International Federation of Arabian Horse Racing Authorities (IFAHR) and Honorary President of Italia Endurance Festival.

“A 7-member team of lady riders were pencilled in before the start of this season and they have been gaining experience in the Festival’s rides held abroad in Portugal, France and the UAE. And today they showed that all the hard work has paid off,” she said.

“The top three riders here will now compete in the World Championship for Young Horses to be held in Slovakia while the remaining four lady riders will also be there to gain experience,” she announced.

Bahrain’s Shura Council member HE Lulwa Awadhi said, “It is a proud day for the women of the Arab and Gulf region as the UAE and Bahrain came out with flying colours. The Festival’s efforts have paid off as our lady riders proved their mettle against some of the best in the world and in tough conditions.”

Silver medallist Shaikha Najla said, “It was a great contest with my sisters from the UAE and I thank HH Sheikh Mansoor and HH Sheikha Fatima for encouraging lady riders.”