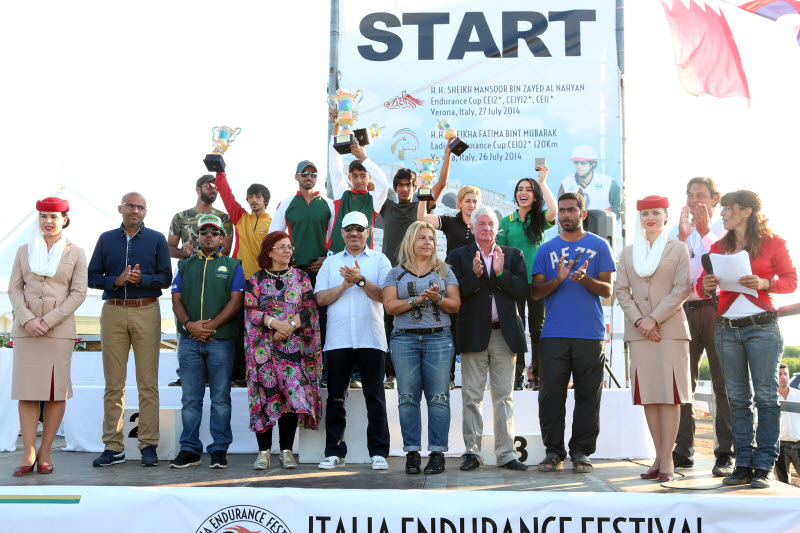 With the narrow pathway amidst the fields making it difficult to overtake, Khalifa waited in third place for much of the final stage before he saw the gap when one of the front runners tired a bit and seized that opening to forge ahead and stave off Al Khayari to win the 126-km event by a narrow two seconds.

The 1-2-3 finish in the Open ride was followed by a similar 1-2-3 by the under-21 UAE riders in the 120-km HH Sheikh Mansoor Bin Zayed Al Nahyan Endurance Cup (Young and Junior riders) Two Star ride.

Finally it was left to Swedish girl Annelie Eriksson on Penelope Del Ma to prevent a clean sweep of the Italia Endurance Festival by the UAE riders when she won the 86-km HH Sheikh Mansoor Bin Zayed Al Nahyan Endurance Cup One Star ride.

On Saturday the UAE were led by a dominant display by UAE’s Afra Khalifa Al Suwaidi on Rivergum Drifter for the individual gold while the UAE’s Aya Abdulla Redha on Quersick Niellans took the bronze. The Emirati girls established their supremacy both in the individual as well as the team categories as Alia Al Khafajy on Exclusiva finished sixth and the three riders totalled 16 hrs 18 mins and 26 seconds for the 120-km event to snatch the team gold ahead of Bahrain.

HE Abdul Rahim Al Awadi from the Ministry of Foreign Affairs along with Bahrain’s Shura Council member HE Lulwa Awadhi and Ms Lara Sawaya, Executive Director of the HH Sheikh Mansoor bin Zayed Al Nahyan Global Arabian Horse Flat Racing Festival and Chairman of Ladies Racing at the International Federation of Arabian Horse Racing Authorities (IFAHR) and Honorary President of Italia Endurance Festival and representatives of the Italia Endurance Festival participated in the prize distribution of all the four rides.

HE Abdul Rahim Al Awadi hailed the success of the UAE riders and also remarked that the HH Sheikh Mansoor Festival was promoting both the sport as well as the UAE heritage.

Ms Lara Sawaya said, “The victory of UAE lady riders on Saturday is very significant as it is the first FEI ride for ladies and the team did very well to win the team gold as well as the individual gold and silver.”

“And on Sunday, young Khalifa Ali Khalfan Al Jahouri did the UAE proud as he led a 1-2-3 in the 120-km HH Sheikh Mansoor Bin Zayed Al Nahyan Endurance Cup Open CEI Two Star ride. The Young Riders’ event was also a clean sweep by UAE riders. The performance of the UAE riders is indeed an advance Ramadan gift to the UAE citizens,” Ms Sawaya added.

“The seven UAE team lady riders will now go to Slovakia next month where three of them – Afra Khalifa Al Suwaidi, Aya Abdulla Redha and Alia Al Khafajy – will compete in the World Endurance Championship for Young Horses,” she said.