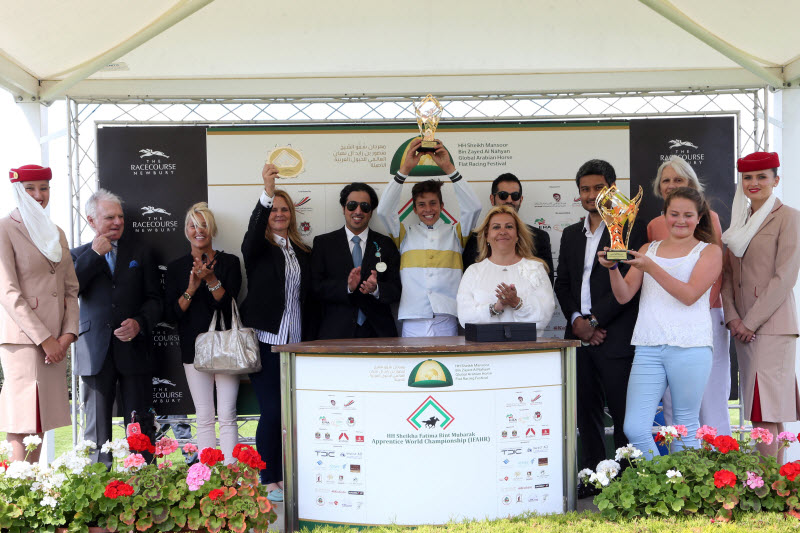 It was the second race of the series for Apprentice jockeys and the 18-year-old Siaffa, who also took part in the inaugural race in Sacramento on July 19, did very well to help the Beverley Deutrom-trained 4-year-old grey horse Karar to a smart win in the 10-horse field.’

It was Siaffa’s first win in 22 starts for the French jockey who got an Apprentice licence earlier this year and also the first win for the UAE bred Dahess horse Karar owned by Sheikh Nasseer Mohammed Nasser Al Hasher.

HE Noora Al Suwaidi, Secretary General, UAE General Women’s Union and Chairman of the UAE Women’s Sports Committee said, “It is a great honour to stage the H.H. Sheikha Fatima Bint Mubarak Apprentice World Championship (IFAHR) series race in Newbury which is an important racing venue for Arabian horses in the United Kingdom. With two Apprentice jockeys from the UAE and Oman taking part, this series will give them the exposure and experience in flat racing.”

“But before the Abu Dhabi finale we have we have two more races in the series in Baden-Baden in Germany on September 7 and in Tarbes in France on October 12. This series is turning out to be an exciting addition to the HH Sheikh Mansoor bin Zayed Al Nahyan Global Arabian Horse Flat Racing Festival,” Ms Sawaya added.