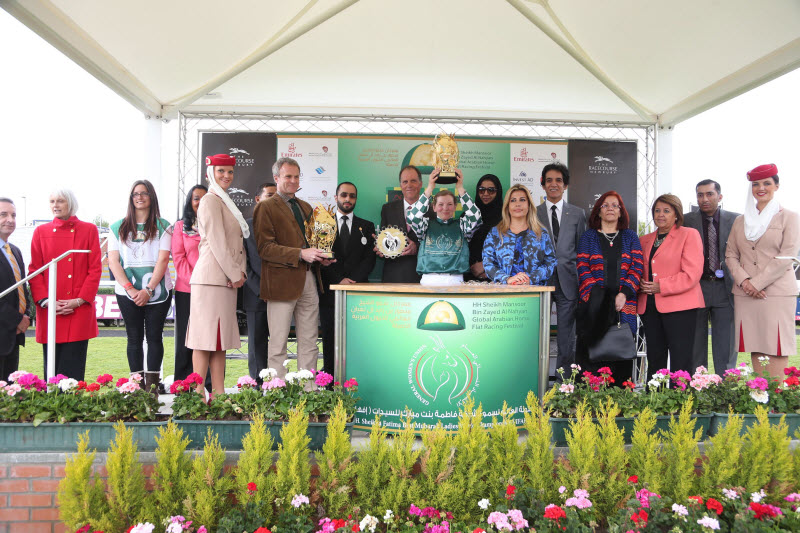 Eleven horses have been declared to battle it to the wire in the 12th round of the HH Shaikha Fatima bint Mubarak ladies World Championship, while a quality field of eight runners makes the lineup for the 10th round of the Shaikh Zayed bin Sultan Al Nahyan Cup at the Hippodrome Wellington racecourse, Ostend, Belgium on Monday. Both events are held under the umbrella of the Shaikh Mansour bin Zayed Al Nahyan Global Flat Arabian Horse Race Festival.

The HH Shaikha Fatima bint Mubarak Ladies World Championship race would be contested over five furlongs straight (1000 metres) on turf and carries a total purse of Euro 30.000. The event is reserved for four-year-olds and upwards Pure-bred Arabians registered in a WAHO-accepted stud-book and run under the rules of the Belgian Jockey Club. It’s an invitation competition for amateur and professional lady riders only as drawn up by the racing program of the championship.

Heading the weights is the well-bred Dutch performer Phraseur Kossack which will be partnered by the Swedish amateur jockey Alice Elmerskog who’s looking forward to land her eighth win from 80th starts.

Trained and owned by Daniel C Klomp in Holland, the son of Prince d’Orient ex Pengalia Kossack by Bengali d’Albert has won the third round of the HH Sheikha Fatima bint Mubarak Ladies World Championship on the White Turf at St. Moritz last February to the delight of the connections before finishing second and unplaced twice in his four starts of the season. He raised his game to seven winners from 26 appearances since 2011.

Meanwhile, the immediate threat would be posed by the French contender Sartejano under the hands of the leading Omani lady jockey Fatma Al Manji. The seven-year-old by Dormane ex Serafina is yet to strike for his Dutch owner and trainer Mrs. Dianna A. K. Doerenberg. He was last seen in the winners’ enclosure in 2012 when he has won two and placed in two of his four starts. Thereafter, he finished twice second and third in four outings last year before going down fighting to take second in his only seasonal appearance during 2014.

Two professional riders have been invited to the race. Hungary’s Szilvia Bakos takes the ride aboard Victor as Emilia Hvitved Pedersen leads the home team’s charge astride bottom weight filly Bima A. D.

Other riders include Austrian Carolin Stummer who partners Magua A. D., Justine Mercier from France holds the reins on Vizir De Faust, Michelle Blumenauer will be in the saddle onboard Nabukko, Rachel Leyshon from Great Britain unites with Attila De Rouaisse, Alice De Bortoli carries the hopes of Italy astride Cobra, Cathrine Fortune from Norway aboard Parma T. and Spain will be represented by Lucia Gelbert Bautista who takes the ride on Sheikah Qardabiyah.

Meanwhile, the 9th round of the Sheikh Zayed bin Sultan Al Nahyan Cup (Listed PA), sees eight contenders going strike for strike to the line in the nine furlong contest (1800m) with Euro 35.000 in prize-money to grab.

The race is presumably going to be very tough with at least half of the eight runners field are in with a chance to put their heads first at the busy end. Gazel T, ridden by Faucon Gaeta, Athlete Del Sol under Pietrasiewicz, Poulain Kossack, Helfenbein up and Bachi Bouzouk, Dehens C. in the saddle have every chance to get the job done.

But, Poulain Kossack, a course and distance winner would be the one to beat. He defeated today’s opponents Speed Kossack and Bachi Bouzouk in the Qatar Near Wellington Cup. Earlier in the season, Poulain Kossack has also claimed Qatar Cup Gr-2 at Longchamp.

However, Athlete Del Sol, was a good winner of two of his three appearances this season including the Wathba Stud Farm Copenhagen Cup at Klampenborg Racecourse in Denmark and unplaced in his last start.

The son of Dormane also won the HH Shaikha Fatima Bint Mubarak Ladies World Championship in Hoppegarten in May and the Shaikh Zayed Bin Sultan Al Nahyan Cup in Stockholm on June 6. Now the seven-year-old has added the Wathba Stud Farm Cup — his third Festival win in three countries.