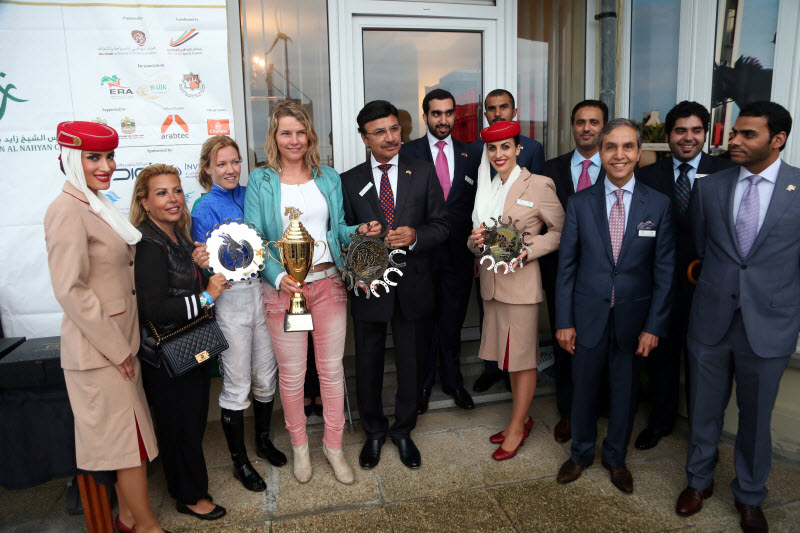 Sheimah Qardabiyah, made virtually all under Spanish amateur lady jockey Lucia Gelabert Bautista to land the 12th round of the HH Sheikha Fatima bint Mubarak Ladies World Championship (IFAHR) at the Ostend racecourse here on Monday. The four-year-old French-bred Dahess filly broke nicely to lead and held on courageously when attacked by hot favourite Phraseur Kossack close home to touch the wire ahead of the 11-horse field.

“It’s a pleasure to become the first Spanish jockey to win in this world’s ladies premier ride,” said a jubilant 23-yerar-old remedial teacher later. “The trainer Mrs. Pia Holom told me that though her filly was not among the top three front runners for the trophy, she was still hopeful that she could go very close,” the winning jockey added.

“I was here accidently,” she said. “I have met by chance with Mrs. Susana Santesson, secretary general of the Fegentri in Spain and from there I was nominated for the race though my country is not an IFAHR active member,” she said. “But to book a dream spot in the grand finale in the capital of the Arabian races in Abu Dhabi on debut is a great achievement! I have been nominated for the 13th round in Warsaw, but after qualifying, they will definitely replace me,” she said.

Meanwhile, a confident Swedish trainer Pia Holom thanked the organisers of the HH Sheikh Mansoor bin Zayed Al Nahyan Global Arabian Horse Flat Racing Festival without which the industry as a whole would have stopped functioning.

“My filly was very keen and fast improving though she ran green last season and sealed her first winner from three starts. Bau gave her a great ride and she was suited by the going and trip,” she noted.

Elsewhere, top Dutch lady jockey Miss Jadey Pietrasiewicz came from nowhere to bring Athlete Del Sol home in great style in the Sheikh Zayed bin Sultan Al Nahyan Cup (Listed), the final race on the card at the same venue. Jadey launched her claim from Gate-1 and raced against the fences before she has put her mount under top gear to pip Poulain Kossack (Andreas Helfinbein) in the dying strides of the 1800m trip and grab the major share of the Euro35.000 mouthwatering trophy.

“I was over the moon,” said the most successful Dutch trainer Karin R Van Den Boss. “Athlete Del Sol is a tough performer which requires a tough handling and with Jadey in the saddle, the choice would have not been bettered,” Karin added as she has welcomed the winner in the Paddock area.
“I didn’t count on his poor run when finished out of the frame behind Vulcain du Clos over course and distance last time out. He was widely drawn and from stall 13 you need a miracle to improve in Ostend,” she said.

The UAE ambassador to Belgium Sulaiman Hamid Almazroui and head of the UAE mission to the NATO, ambassador Mohamed Ali Al Naqbi alongside the staff members have attended the race which has attracted a big crowd of racegoers who have packed the beautiful venue since early in the afternoon.

The top diplomats thanked the wise leadership of the President His Highness Sheikh Khalifa bin Zayed Al Nahyan and his brother His Highness Sheikh Mohammed bin Rashid Al Maktoum, UAE Vice-President and Prime Minister and Ruler of Dubai and their Highnesses the Members of the Supreme Council and Rulers of the emirates for their strong support and backing of sports to keep the flag of the young nation flying all around the globe.

Lara Sawaya, executive director of the HH Sheikh Mansoor bin Zayed Al Nahyan Global Arabian Horse Flat Racing Festival and chairman of Ladies Racing Committee in the International Federation of Arabian Racing Authorities (IFAHR) congratulated both winners pointing out that they are delighted to stage another successful event and there’s more to come from the festival.

“Under the directives and vision of HH Sheikh Mansoor bin Zayed Al Nahyan and HH Sheikha Fatima bint Mubarak, Mother of the UAE, to widen the scope of our activities, we are excited to welcome onboard the leading Indian professional lady jockey Rupa Narpat Singh in the next round of the HH Sheikha Fatima bint Mubarak Ladies World Championship IFAHR at the Sluzeiwic racecourse in Poland on Sunday,” she said.

A winner of 560 races out of her 3000 starts, at strike rate of nearly 33 percent, Rupa has made her debut as the only female jockey of Indian origin at the Chennai Racecourse on March 21, 2002.

Today, after participating in 3000 races, Rupa is far more confident and successful. In 2007, Rupa received Zee TV’s “Stellar Achievement Award which recognises everyday women who have made a mark and contributed to society in their own way.

“Now, we will have at least 200 girls invited for the Grand Finale in Abu Dhabi in November. All girls who have participated in the 13th round are invited while the winners plus (others) will lineup for the grand prize at the Abu Dhabi Equestrian Club,” she confirmed.

Regarding the upcoming round of the Sheikh Zayed bin Sultan Al Nahyan Cup which was originally scheduled at the Baden Baden Racecourse, Sawaya said they are making arrangements to relocate the race. “Also, the venue of the third round of the HH Sheikha Fatima bint Mubarak Apprentice World Championship (IFAHR) is also to be confirmed,” she said.