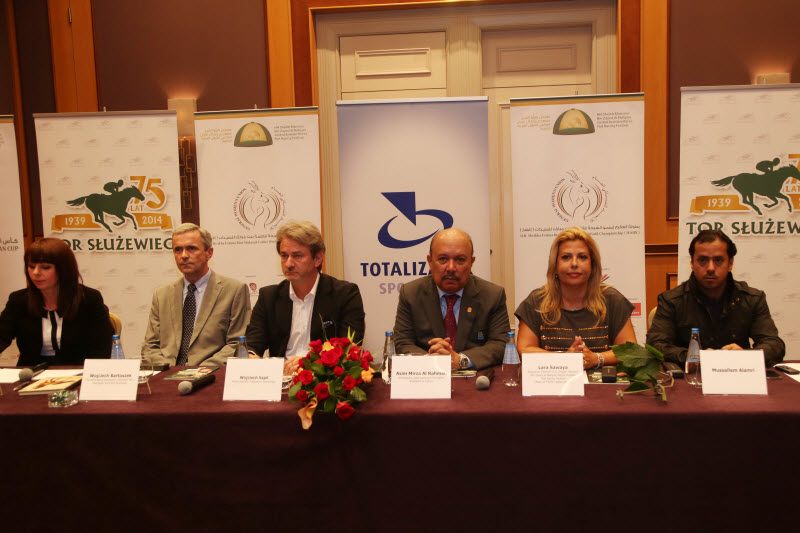 Warsaw- Poland: Stage is set for the penultimate round of the HH Sheikha Fatima bint Mubarak Ladies World Championship IFAHR and the 11th round of the Sheikh Zayed bin Sultan Al Nahyan in the United Arab Emirates Day at the Służewiec Horse Race Track here on Sunday.

The event which is held as part of the HH Sheikh Mansoor bin Zayed Al Nahyan Global Arabian Horse Flat Racing Festival features eight races of purebred Arabian as race enthusiasts can expect a big dose of the sports excitement.

“We are lucky to receive all this support from the wise leadership of the President His Highness Sheikh Khalifa bin Zayed Al Nahyan, and his brother His Highness Sheikh Mohammed bin Rashid Al Maktoum, UAE Vice-President and Prime Minister and Ruler of Dubai and their brothers Their Highnesses Members of the Supreme Council and Rulers of the emirates,” said Asim Mirza Al Rahma, UAE ambassador to Poland.

Speaking to newsmen during a pre-race international Press conference on Thursday, Al Rahma thanked HH Sheikh Mansoor bin Zayed Al Nahyan and HH Sheikha Fatima bint Mubarak, Mother of the UAE, for their intellectual initiative to promote and preserve the culture and heritage of the UAE around the world.

“The Arabian horse is part of our history and by propagating this noble creature, we are opening a wide open window for a more bright and prosperous future for our nation and the Arab world at large,” he said.

Lara Sawaya, Executive Director of the HH Sheikh Mansoor bin Zayed Al Nahyan Global Arabian Horse Flat Racing Festival and chairman of Ladies Racing Committee in the International Federation of Arabian Horse Racing Authorities IFAHR said: “We are truly delighted to return to Warsaw in this particular time as it makes history in the festival.

“Under the vision and directives of HH Sheikh Mansoor bin Zayed Al Nahyan, UAE Deputy Prime Minister and Minister of Presidential Affairs, Poland will host the sixth edition of the World Arabian Horse Racing Conference 2015 with 400 breeders, trainers, jockeys, veterinaries, observers and other experts involved in the Arabian racing industry gathering under one roof to debate for a better future of this noble creature.

“The Conference will run over seven days from May 25th to 31st and culminates with the HH Sheikha Fatima bint Mubarak, Mother of the UAE, Ladies World Championship, the only and most prestigious event of its kind on earth. It’s a race for ladies and not an amateur challenge. It’s open for professional lady jockeys as well,” she said.

“You have some good lady jockeys in Poland, and the Polish lady who will be riding on Sunday is automatically invited for the Grand Final of the championship in Abu Dhabi where 16 riders make the line-up for the mouthwatering prize-money at the Abu Dhabi Equestrian Club, in Abu Dhabi, the world’s capital of Arabian races as marked by the International Federation of Arabian Horse Racing Authority (IFAHR),” she added.

“Abu Dhabi will also host 200 lady jockeys from the 56 countries that took part in the 13th rounds of the championship. It is furthermore, the venue of the final of the final rounds of HH Sheikha Fatima Bint Mubarak Conference for Training and Education IFAHR and the Sheikh Zayed bin Sultan Al Nahyan Cup,” she confirmed.

“Poland is making history, because it will see the debut of the top Indian professional lady jockey Rupa Singh, a winner of 506 rides in 3000 starts and with India onboard, the countries which are represented in the festival have been increased from 55 to 56 nations,” she clarified. But, Saway confirmed that the festival’s races in Warsaw during the month of August will not be affected by the races which will be associated with the Conference.
Regarding the 12th round of the Sheikh Zayed bin Sultan Al Nahyan Cup in Baden Baden, Sawaya said it has been cancelled, pointing out that the venue will be changed due to some arrangements.

“Next year, the festival will host 94 races, including the new version of the Sheikh Zayed bin Sultan Al Nahyan Cup. This is going to be an international event at the highest level from all respects,” she said.