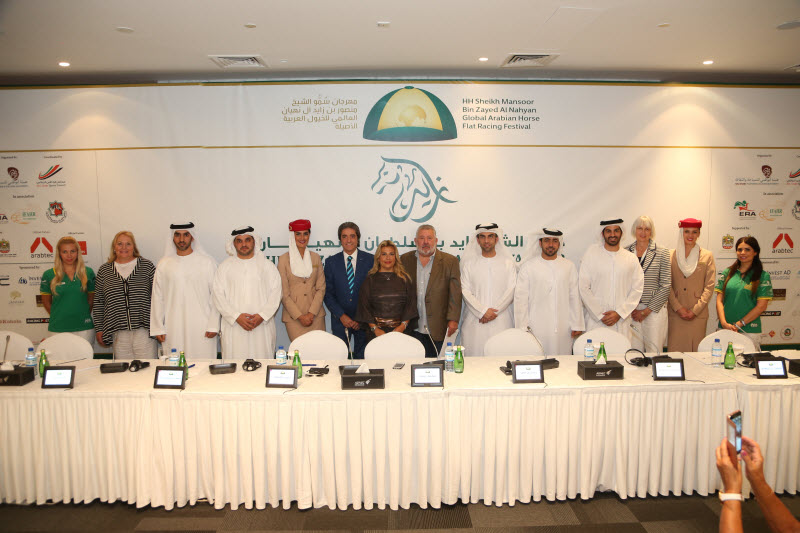 Abu Dhabi – The Arabian horse racing worldwide has received a big boost from the HH Sheikh Mansoor bin Zayed Al Nahyan Global Arabian Horse Flat Racing Festival with the introduction of a mouthwatering bonus for the American Triple Jewel and the upgrade of the prizemoney of the European Triple Crown during the 2015 season, it was revealed on Thursday.

Speaking to newsmen at the Capital Suite No. 8 at ADNEC, Sawaya noted that the bonus for the European Triple Crown will be increased to Euro50.000 and the well-bred French horse Amaretto, the only winner of the trophy for three seasons in a row, will receive the trophy on the final day of the festival’s competitions in the capital of the world’s Arabian horse races Abu Dhabi on November 9.

“We are all inspired with the initiatives and vision of HH Sheikh Mansoor bin Zayed Al Nahyan and our job is to implement his thoughts on the ground,” she said.

“The prizemoney of the Sheikh Zayed bin Sultan Al Nahyan Cup in Europe and USA will remain unchanged (Euro35.000 each) and its equivalent in US dollars respectively, but the new development is a bonus of $150.000 for the newly introduced Triple Jewel for US and the increase of the bonus for Europe to Euro50.000,” she confirmed.

“The first leg will be run at the Sam Huston racecourse on April 8, over 1400m, followed by Pleasanton in July 5, over 12 furlongs and Los Alamitos around September 20, over a mile, bringing the total number of the festival’s races to in America to 23” she said.

The three events will carry three different names of the rare stones like the Diamond, Amethyst and the Emerald Green” she clarified.

Regarding the European Triple Crown, Sawaya confirmed that the races will be held in Toulouse, Holland and Poland likewise under the umbrella of the International Federation of the Arabian Horse Race (IFAHR).

“The race which will be held in Warsaw in coincidence with the World Arabian Horse Races Conference 2015 will not be part of the championship. There’s an international Sheikh Zayed bin Sutan Al Nahyan Cup (Listed) to be held at the same venue in August, which will be the final leg of the Triple Crown that has been launched in 2010 for the European horses,” she said.

“But, if there are European horses that would like to compete in the American Jewel Crown, the festival would be delighted to support the owners and trainers in respect of the accommodation and registration fees,” she promised.

However, Sawaya said that the winner of the trophy on either coast of the Atlantic should take part at least in two of the three races to qualify for the bonus provided that the races will be restricted to 4-year-olds and above.

Elsewhere, Sawaya announced that, two new categories have been added to the 11 categories of the HH Sheikha Fatima bint Mubarak Darley Awards at the house of the Oscars in LA from next year 2015,

“The top female endurance lady jockey and a special award for the lifetime achievement lady from those who are working from behind the scenes and doing great jobs have been added to the list of honours.

“This lifetime achievement award will not be restricted to the sponsors alone, and the winning lady could be from any other party. Also, the endurance associations around the world will be asked to nominate one jockey for the award and the judges will make the final selection,” she added.

Sawaya said the 2015 lifetime achievement’s title will be awarded this time to a specific lady who has been doing everything right, but she declined to elaborate.

Meanwhile, Sawaya welcomed Saif Rashid, representing the new partners of the festival ADNEC who have pledged their support and backing for the efforts to promote the UAE culture and heritage through the encouragement and promotion of Arabian races.

Genny Haynes, IFAHR vice-president and executive board member and Sam Vasquez from the Arabian Racing Cup welcomed the incredible support of the festival for the Arabian races in Europe, USA and elsewhere saying that without the backing of HH Sheikh Mansoor bin Zayed Al Nahyan, they would have struggled hard for survival.

Finally, Sawaya urged the owners to stay tuned, the trainers to saddle their horses and the jockeys to polish their boots to battle it out for the richest bonus for the Arabian races around the world.

Festival races in Bucharest on Saturday