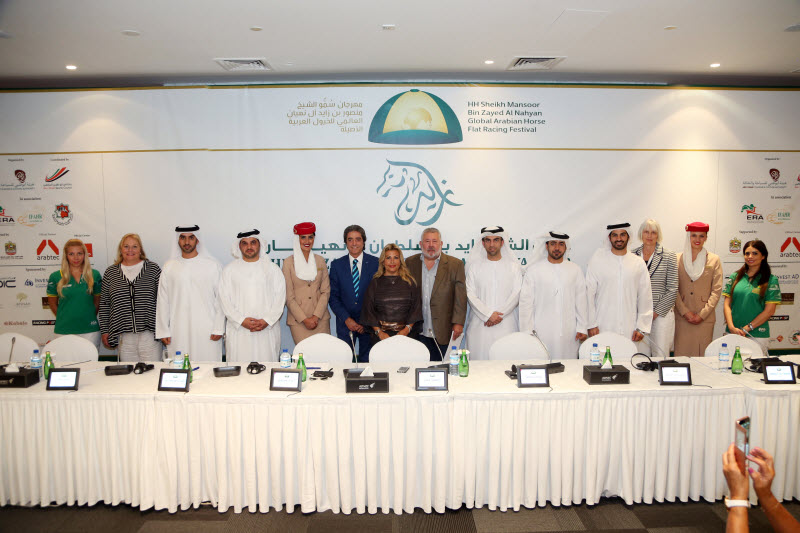 Abu Dhabi – Under the directives and vision of HH Sheikh Mansoor bin Zayed Al Nahyan, UAE Deputy Prime Minster and Minister of Presidential Affairs, the umbrella of the HH Sheikh Mansoor bin Zayed Al Nahyan Global Arabian Horse Flat Racing Festival has been extended to cover endurance events in the five continents around the globe as from the upcoming 2015 season, it was revealed on Friday.

“The HH Sheikh Mansoor festival will be represented in Slovakia by the gold medalist and record smasher Afra Khalifa Al Suwaidi, winner of the world class ladies competition, the Her Highness Sheikha Fatima bint Mubarak Ladies Endurance Cup in Verona, Italy, last year. Moreover 18 to 20 UAE riders from both sexes will also be in the fray.

Gilles Cabardos addressed the news conference on behalf of the hosts saying that they are looking forward to welcome everyone in the brand new outstanding Hippo Arena Samorin in Slovakia later this month.

“I would like to thank HH Sheikh Mansoor bin Zayed Al Nahyan for this generous support and backing which will be of great benefit for the prosperity of the endurance sport in general and the Arabian horse breeding in particular,” she said.

“So far, there are 65 entries from 15 countries of the world. The ride will be held on September 27 in the beautiful landscape of the surroundings of Pezinok and Samorin, where the terrain and the period of the ride is suitable for young horses,” she added.

The opening event of the 2015 season, the CEI** Endurance Fontalaebleau will be held in France from March 28 to 30, 2015 with more than 400 horses expected to line up for honours.

Portugal will play host for the second straight year of the CEI** Atoleiros endurance ride at Fronteira from May 1 to 3.

“The horses for the UAE riders will be provided by Hassan Rakad Al Mansouri from the stables of the HH Sheikh Mansoor bin Zayed Al Nahyan in Spain and Portugal,” Sawaya confirmed.

Thereafter, the endurance competitions under the umbrella of the festival will move to Verona in Italy, with the good wishes that it’s not going to rain on that day.

Italy will again organises the World Championships for Young Horses (7-year-old) at the Lake Garda in Verona from September 26 to 27, 2015.

The festival reaches Latin America to sponsor the CEI Piramar Endurance Ride from October 15 to 18, 2015 before returning again to the old continent to sponsor the European Championship in France. But this should be equally confirmed by the FEI.

Meanwhile, the Australian Endurance Federation has been notified about the directives of the HH Sheikh Mansoor bin Zayed Al Nahyan to extend the activities of the festival and provide the necessary support for the Australian endurances rides in Down Under.

“There’s another new championship and a new style of endurance rides to be revealed under the umbrella of the festival and it will be held in Slovakia in 2015.

“All the races are ‘FEI’ and the respective federations have been notified to do the needful in the right and most perfect manner,” she stressed.

“We have been directed by HH Sheikh Mansoor bin Zayed Al Nahyan to focus on the future,” she said.

Elsewhere, the partners and sponsors of the festival have all reiterated their determination to back the initiative of HH Sheikh Mansoor bin Zayed Al Nahyan to promote the UAE culture and heritage around the globe.