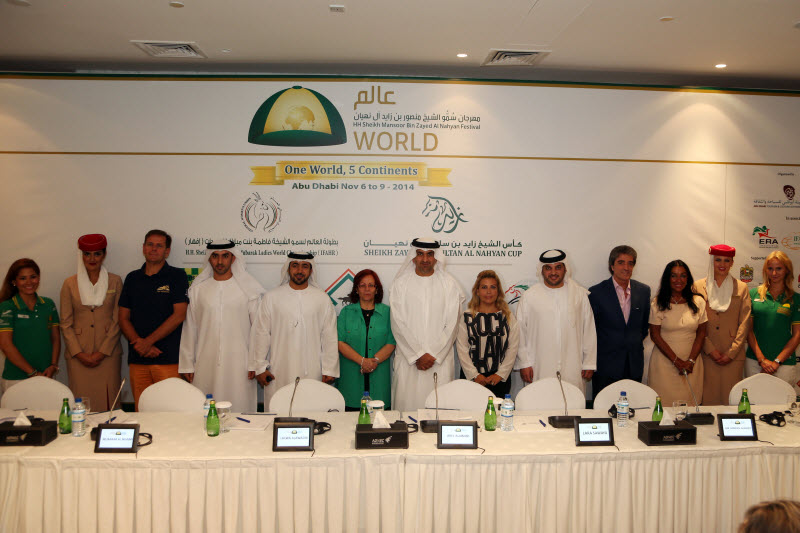 Abu Dhabi – With two hundred and twenty amateur and professional lady jockeys from 56 countries around the globe and 800 guests from the international Arabian racing industry coming to Abu Dhabi, the HH Sheikh Mansoor bin Zayed Al Nahyan Global Arabian Horse Flat Racing Festival celebrates its sixth anniversary at the Abu Dhabi Equestrian Club on November 9, 2014 under the slogan of ‘One World, 5 Continents’.

“The Grand Finale of the world’s richest ladies Arabian horse race, the HH Sheikha Fatima bint Mubarak Ladies World Championship (IFAHR) sees a field of 16 runners lining up for honours, as represented by the 13 winners of the 13 rounds of the competition plus three riders to be nominated by the organisers,” said Lara Sawaya, Executive Director of the HH Sheikh Mansoor bin Zayed Al Nahyan Global Arabian Horse Flat Racing Festival and Chairman of Ladies Racing Committee in International Federation of Arabian Horse Racing Authorities (IFAHR).

“Under the directives and vision of HH Sheikh Mansoor bin Zayed Al Nahyan, UAE Deputy Prime Minister and Minister of Presidential Affairs and HH Sheikha Fatima bint Mubarak, Mother of the UAE, the full details of the championship will be unveiled in a special news conference to be held in Paris during the meetings of the annual congress of the International Federation of Arabian Horse Racing Authorities, one day before the Prix de L’Arc de Triomphe on November 3 which also coincides with the third round of the HH Sheikha Fatima bint Mubarak Apprentice World Championship (IFAHR),” she confirmed.

“The Norwegian lady Veronica Aske, a winner of the sixth round of the championship 2013 in Toulouse will skip the finale due to pregnancy and her runner up will be selected=”true”=”true” instead,” she said. “But, in the event that the second finisher has already qualified, the third runner up will be the second choice. In all cases, one of the girls who rode in Toulouse will be represented in the finale and not from elsewhere,” she confirmed.

Regarding the bonuses for the jockey clubs and riders, Sawaya said: “The festival has reserved Euro40.000 bonus to be distributed among the jockey clubs of the top five girls on the basis of the accumulated points according to the rules of the competition, while the top five professional jockeys will receive a bonus of Euro30.000 and likewise the amateur lady jockeys,” she said.

Speaking about the giant move by the festival, Sawaya said, they were directed by HH Sheikh Mansoor bin Zayed Al Nahyan to invited all training schools around the five continents, including India, Japan and Malaysia to meet at the HH Sheikh Mansoor bin Zayed Al Nahyan Jannah Suite and the Abu Dhabi Sports Council to discuss over six sessions the concerns and affairs of the owners, trainers and jockeys.

“The set up of the new International Racing Schools Association which will be based in Abu Dhabi as well as the Liverpool John Moores University research study on the jockeys diet will top the agenda alongside other important issues,” she said.

Sawaya hailed the hard work of the festival to explore new grounds within the US and elsewhere.

“We are delighted to see the Los Alamitos racecourse reopened for Arabian races after seven years of suspension and the beautiful sprinters venue hosts the Diamond round of the American Triple Jewel of the Sheikh Zayed bin Sultan Al Nahyan Cup series,” she said.

Meanwhile, Aref Al Awani, secretary general of the Abu Dhabi Sports Council promised to revamp all resources to ensure the success of the festival’s activities. The same opinion was echoed by the sponsors and partners of the festival. Jan Zdrawski thanked HH Sheikh Mansoor bin Zayed Al Nahyan and the organisers of the festival to elect Warsaw as host for the 2015 World Arabian Horse Racing Conference and promised warm welcome for all participants.

Bahraini legislator Luluwa Al Awadhi thanked HH Sheikh Mansoor bin Zayed Al Nahyan and HH Sheikh Fatima bint Mubarak, Mother of the UAE, for the great initiative to pave the way before the women from all over the world to show their talent as amateur and professional jockeys.