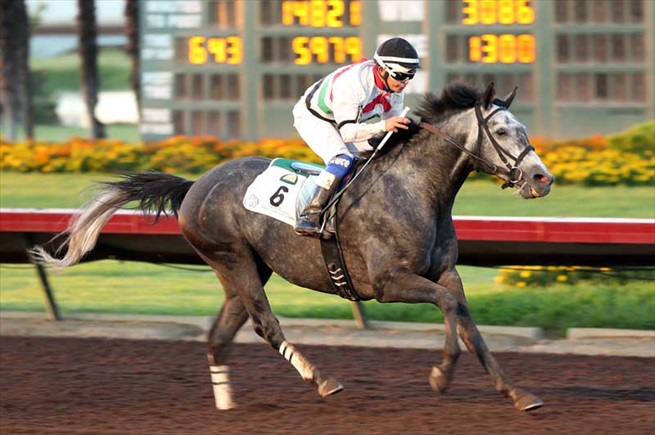 With Ms Dixie pulling out the fans looked forward to another contest between Valiant Boy SBFAR and RB Champagne Taste but the former was too good for the third time in a row.

Coming on the back of two Group 1 wins earlier this year, Valiant Boy SBFAR, trained by Charles Lees, decimated his opposition once they headed for the home stretch in the 1600-metre contest. Jockey Ramon Guce was riding the son of Darweesh for the first time and ended up with an easy win with RB Champagne Taste and Ayers taking second and third spot. Valiant Boy SBFAR won the dirt contest in 1:45.84.

It was Valiant Boy SBFAR’s seventh win on the trot and brought his career record to 11 wins in 19 starts.

“The trainer told me to just let him settle down but Valiant Boy wanted to run from the quarter-mile pole itself. I had to hold him back and once we hit the bend I let him go and the race was all but over. He is the best Arabian horse I have ever ridden,” said the winning jockey Guce.

Liz Collard, representing the winning yard said, “We came here to support this race and the horse was in superb form. He showed a fine turn of foot and we hope he continues his great form.”

“It is heartening to see an increase in the number of races the HH Sheikh Mansoor Bin Zayed Al Nahyan Global Arabian Horse Flat Racing Festival holds here in the US. Today’s race carries the name of the late President Sheikh Zayed bin Sultan Al Nahyan and hence is a symbol of pride and honour for us,” said HE Al Saboosi.

Ms Lara Sawaya, Executive Director of the HH Sheikh Mansoor Bin Zayed Al Nahyan Global Arabian Horse Flat Racing Festival and Chairman of Ladies Racing Committee in the International Federation of Arabian Horse Racing Authorities (IFAHR) said, “With Arabian racing just having returned to Los Alamitos after a gap of seven years, fans here today witnessed a champion horse in action. While so many favourites failed to win today in the other races, the Arabian horses ran to form and that is a huge boost for the Arabian racing as well as the fans. We are looking forward to return here in Los Alamitos when this track hosts the third race in the Triple Jewel series – the Festival’s new series for 2015 for Purebred Arabian horses in the US. ”