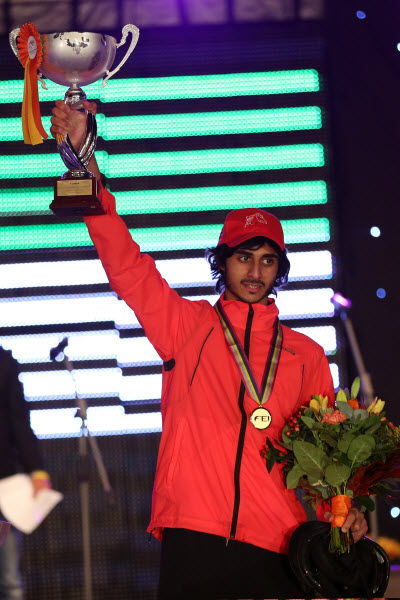 Riding the Esmail Mohammed-trained Tiswan Fageole, Al Faresi completed the challenging 120km course in a time of five hours, 47 minutes and 29 seconds as French riders filled the second, third and fourth places on a day of mixed fortune for UAE riders.

Sheikh Hamed Dalmook Al Maktoum was the first rider to cross the finish line but his horse Normandy went lame and was cruelly disqualified.

However, the UAE endurance team had other reasons to be happy as Afra Khalifa Al Suwaidi made history when she secured a praiseworthy fifth place among a strong field of 43 riders representing 15 countries. The talented rider from Al Ain also wrote a new chapter by becoming the first Emirati lady rider to compete in a World Championship event.

“I have never won or competed in anything as big as this event,” 20-year-old Al Faresi said. “This is the happiest moment of my life and I would like to dedicate this victory to The President His Highness Sheikh Khalifa Bin Zayed Al Nahyan and the UAE people.

“It is a very disappointing that Sheikh Hamed Dalmook’s horse did not pass the final VET gate, but I’m still proud to have secured victory for the UAE.“I’ve waited a long time for this and it is a fantastic feeling to win the first ever ride in Slovakia. I have been competing in many big rides but I’ve not been lucky. I thought I can achieve something good after I finished fourth in the prestigious 160km CEI 3* President Cup at Al Wathba. And it happened today. I feel so blessed.”

Al Faresi said that he got his winning formula from His Highness Sheikh Mohammed Bin Rashid Al Maktoum, Vice President and Prime Minister of the UAE and Ruler of Dubai.

“His Highness Sheikh Mohammed advised us to go into the lead earlier in order to make the other riders push their horses in an attempt to keep pace with us,” he said. “His Highness also told us to settle out horses during the middle loops so as to conserve their energy for the final loop where we stepped up the pace and pulled away to win comfortably.”

“You can’t win if your horse is not one hundred percent ready and I think Esmail had the horse in the best possible condition,” he said. “It was only Tiswan Fageole’s second endurance ride but he behaved like a horse with a lot of experience and ability. I think he will get even better with age and win higher class rides.”> The FEI World Endurance Championships for Young Horses 2014 brought together riders from the United Arab Emirates, Argentina, France, Estonia, Russia, Spain, Portugal, Hungary, Poland and the Czech Republic.

The event also enjoyed a fifty percent completion with 21 horses checking in at the final VET gate and delighted FEI Endurance Director Ian Williams who described the historic first World Championship event in Slovakia as a ‘big success.’

“We could not happier with the quality of completion and high rate of finishers,” he said. “You want to make the course challenging but you also want to see as many horses and riders possible complete the ride. So we’re very pleased with the results and believe that the organisers here in Slovakia have done a splendid job.”

Williams always conveyed the best wishes of FEI President Her Highness Princess Haya Bint Al Hussein, wife of His Highness Sheikh Mohammed Bin Rashid Al Maktoum, Vice President and Prime Minister of the UAE and Ruler of Dubai, to all the riders who participated.

“Safety is always of great importance to the FEI and Her Highness Princess Haya, and she sends her congratulations to the winners and all those riders who participated here,” he added. “She is delighted with the way the event was organised and with the good results and success of the Emirati riders.”

“This event was planned and executed under the directives and instructions of His Highness Sheikh Mansoor Bin Zayed Al Nahyan,” she said. “We had 2,000 metres of branding for the Sheikh Mansoor Festival and the event was broadcast live to many parts of Europe and the UAE.

“Sheikh Mansoor is a committed to supporting and sponsoring events like these under the banner of the HH Sheikh Mansoor Bin Zayed Al Nahyan Global Arabian Flat Racing Festival and we are very pleased with the response we have had from the organisers, support sponsors, the riders and endurance and Purebred Arabian enthusiasts from around the world.

She also hailed the winner Al Faresi and made special mention of the performance of Al Ain’s lady rider Afra Khalifa Al Suwaidi. “This was a huge accomplishment for the Emirati ladies team supported by the Sheikh Mansoor Festival. Afra did the whole team proud with her excellent efforts and can be considered as a true champion being the only lady from the UAE riding against men and top riders from Europe.

“We will meet again on October 5 in Paris, France during the annual congress of the International Federation of Arabian Horse Racing Authorities (IFAHR), one day before the Prix de L’Arc de Triomphe to announce details regarding the One World, 5 Continents conference which will be held in Abu Dhabi from Novemebr 5-10 to celebrate the sixth anniversary of the HH Sheikh Mansoor Bin Zayed Al Nahyan Global Arabian Flat Racing Festival,” she added.

“This will be a major occasion with 200 lady jockeys from 56 countries around the world and 40 amateur riders attending the event. We will also host over 800 guests from the international Arabian racing family to Abu Dhabi to join us in celebrating this significant year.”

Sawaya also announced during the closing ceremony for the FEI World Endurance Championships for Young Horses that the top six finishers would be special guests in Abu Dhabi during the event.