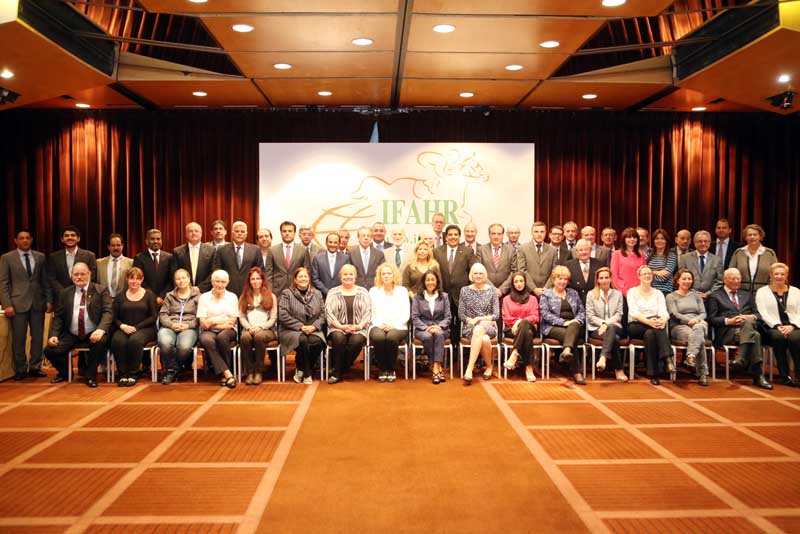 “The 2014 edition of the HH Sheikha Fatima bint Mubarak Conference for Education and Training will be held on November 7 and 8. Under directives from HH Sheikh Mansoor bin Zayed Al Nahyan, Deputy Prime Minister of the UAE and Minister of Presidential Affairs, this conference will from next year be under IFAHR and we will be inviting one school from each country to participate in the conference,” Ms Sawaya announced.

“Out of the 13 winners of the 13 races in the HH Sheikha Fatima bint Mubarak Ladies World Championship IFAHR series, 12 will be joined by three jockeys – one each from Hungary, Japan and Morocco. Norwegian lady jockey Victoria Allers who won in Toulouse will not be competing as she is pregnant and she will be replaced by fellow Norwegian Veronica Aske,” Ms Sawaya said.

Mr. Sami Jassim Al Boenain, Chairman of IFAHR and General Manager of the Qatar Racing and Equestrian Club said the HH Sheikh Mansoor Festival helped breeders, owners and trainers of Arabian horses all over the world.

“Purebred Arabian races are now being held alongside the prestigious thoroughbred races in the same meeting. The target to see more Arabian races is progressing in the right direction,” Al Boenain said.

“Brazil and Portugal are all set to start Arabian racing in an organised manner,” he added.

Mr. Wieger Joost de Ruiter, IFAHR Treasurer and Chairman of Dutch Arabian Racing Committee hailed the success of the Festival. “Purebred Arabian racing in Holland was nearly extinct until the HH Sheikh Mansoor Festival started and now, particularly at the grassroots level there is a huge change for the better.”

“Last year in one race meeting of the HH Sheikh Mansoor Festival there were 16 diplomats present and this has never been seen before, even in any thoroughbred race. The Festival had created great atmospheres at the racing venues and this has made a positive impact on Arabian racing,” he said.
Mr Adnan Sultan Al Nuaimi, Director General of Abu Dhabi Equestrian Club said Abu Dhabi was ready to host the Purebred Arabian racing fraternity and welcomed all visitors to the UAE capital while Mr Pat Buckley, Racing Manager of Abu Dhabi Equestrian Club gave details of the race conditions.

Ms Susanna Santesson, representing Fegentri, said the Festival was a huge boost to lady jockeys and thanked Her Highness Sheikha Fatima bint Mubarak, Chairwoman of the General Women’s Union, Supreme President of the Family Development Foundation (FDF) and Head of the Supreme Council for Motherhood and Childhood for her support. 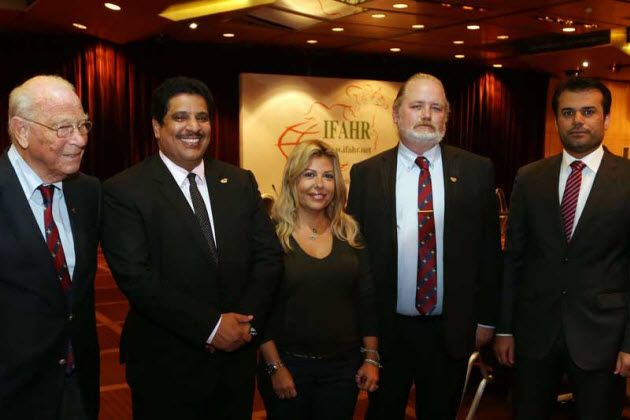