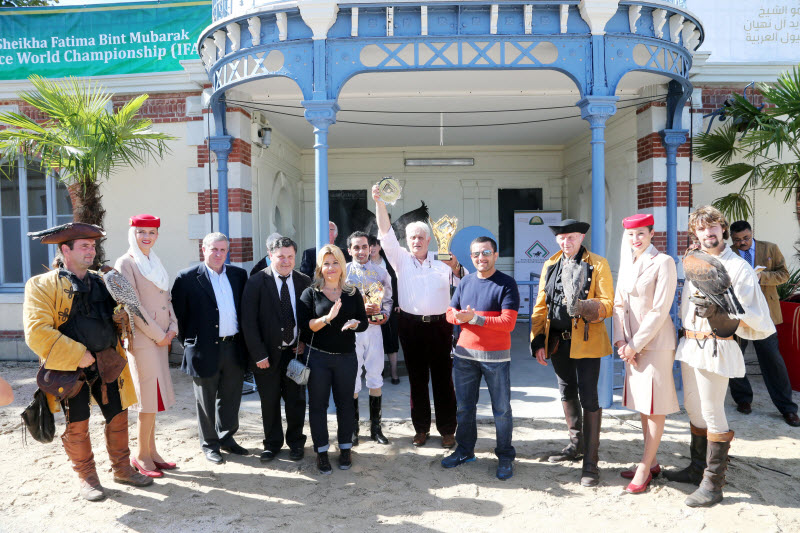 It was worth the effort for UAE Apprentice jockey Ahmed Al Subose, who finished third in a race in York on Saturday and then travelled to the south of France for the HH Sheikh Mansoor bin Zayed Al Nahyan Global Arabian Horse Flat Racing Festival’s HH Sheikha Fatima bint Mubarak Apprentice World Championship (IFAHR) race at the Tarbes race course on Sunday.

Al Subose took up the running on the home stretch of this 1500-metre turf contest to overtake leader and pre-race favourite Jenny Powell from Great Britain on Syrianah and win by a quarter of a length in a time of 1:39.30. Claire Marie Murray from Great Britain on Burkan Al Khalediah ran in third while the winner’s stablemate AJS Mohanad under Barbara Szentes from Hungary was fourth.

Al Subose is in the middle of a good season having won twice already but said his first attempt in France and to end on a winning note was a great moment.

“This is my first ever race in France and to win is a great feeling. AJS Rudainah ran a good race and once I asked her for an effort she cruised home in great style,” Al Subose said.

Winning trainer Jean-Francois Bernard was delighted with his filly AJS Rudainah’s performance. “She is a bit lazy and does not have lot of speed. I asked Ahmed to wait and give her some time before she gets into action. He did just that and she was breezing home on the stretch. This is a good win for the Al Shaqab Racing.”

Mr Abdulla Ahmed Al Marzooqi, Revenue Operations Section Manager, Abu Dhabi Tourism and Culture Authority attended the race and gave away the trophies to the winners. “I congratulate the UAE knight Ahmed Al Subose who has done the UAE proud with this excellent win. This is a great race series that reflects the UAE’s focus on the heritage sport like Purebred Arabian racing in the UAE and the world over.”

Ms Lara Sawaya, Executive Director of the HH Sheikh Mansoor bin Zayed Al Nahyan Global Arabian Horse Flat Racing Festival and Chairman of Ladies Racing Committee in the International Federation of Arabian Horse Racing Authorities (IFAHR) and Chairman of Apprentice Jockeys & Racing in IFAHR said, “This is a superb win for the UAE’s Ahmed Al Subose in this third race of the series, who has now made it to the final on November 9 by merit. We now have the penultimate race of this HH Sheikha Fatima bint Mubarak Apprentice World Championship (IFAHR) series in The Netherlands after which all the four winners will reappear in the final on November 9 in Abu Dhabi.”

Veronique Briat, Manager of the French Arabian racing body AFAC hailed the support of the HH Sheikh Mansoor bin Zayed Al Nahyan Global Arabian Horse Flat Racing Festival to Arabian racing in France. “We have over 80 races every season but this series which is only for Apprentice jockeys is a unique event and encourages upcoming jockeys including lady jockeys. The fans enjoyed the racing today and we hope we will stage more races of this popular Festival here in Tarbes and in other racecourses in France,” she said.