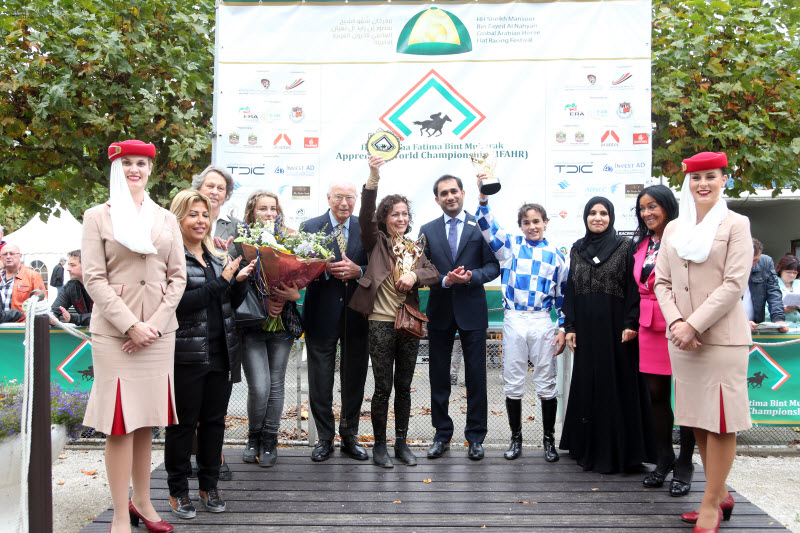 Eighteen-year-old Jaime Gelabert Bautista scored a fantastic win on favourite Hurra to qualify for the November 9 final of the HH Sheikha Fatima bint Mubarak Apprentice World Championship (IFAHR) series in Abu Dhabi. And in the same meeting in Abu Dhabi, his elder sister Lucia will be contesting in the HH Sheikha Fatima bint Mubarak Ladies World Championship finale after winning the Belgium leg earlier this year.

Thus Spain, which is not even a member of the International Federation of Arabian Horse Racing Authorities (IFAHR), will be represented in two World Championship finals in Abu Dhabi and this truly reflects the global success of the HH Sheikh Mansoor bin Zayed Al Nahyan Global Arabian Horse Flat Racing Festival.

Sunday’s race was the fourth and final race in the HH Sheikha Fatima bint Mubarak Apprentice World Championship (IFAHR) series and eight apprentice jockeys including the UAE’s Saeed Al Mazrouei lined up. But Jaime Gelabert Bautista on Hurra, from trainer Diana Dorenburg’s yard, came up with a breezing run on the outside to finish ahead of Nabukko under Irish Apprentice Josh Doyle to complete a 1-2 for the Dutch trainer.

Al Mazrouei on Derham came up with a late run and finished third while American Laura Carson on Robbie The First was fourth.

“The trainer told me to keep her in mid pack and the race went well for me. Hurra had a lot of speed and I did not have to do much once he changed gears,” said the young Bautista.

“I do not know much English so with my sister Lucia also coming to Abu Dhabi I will be more confident and we will go all out to keep our country’s flag flying high,” he said. 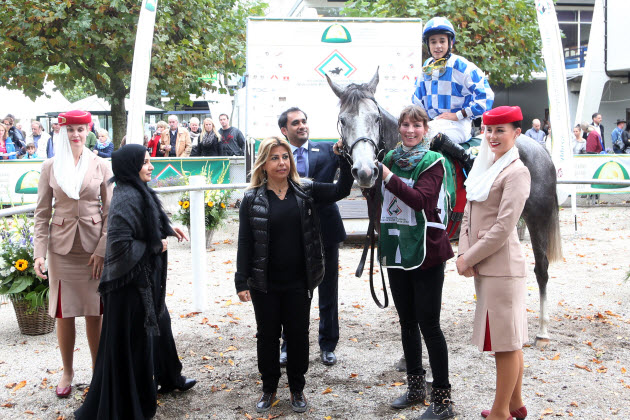 HE Alnaqbi said, “The brilliant initiative of HH Sheikh Mansoor bin Zayed Al Nahyan, UAE Deputy Prime Minister and Minister of Presidential Affairs and HH Sheikha Fatima bint Mubarak, Mother of the UAE, to promote this noble creature is highly appreciated and valued by all Arabian horse breeders, owners, trainers, jockeys and race-goers around the globe.

“I think this is a real breakthrough to enhance the image of our nation all over the world and strengthen the already excellent ties between the UAE and the rest of the world,” he said.

Mrs Alhan M. Ahmed Al Attar, “It is a great spectacle to watch the Purebred Arabian horses in action here in Europe. Arabian racing is part of the UAE’s heritage and witness the promotion of our culture here is indeed a proud moment.”

“We have not spotted all four finalists for the HH Sheikha Fatima bint Mubarak Apprentice World Championship (IFAHR) finale in Abu Dhabi on November 9 and they will be joined by 10 others in what is expected to be a cracking finish to this newly-introduced series,” Ms Lara Sawaya said.

“The fraternity of Apprentice Jockeys will get a further boost prior to the finale with the HH Sheikha Fatima bint Mubarak two-day conference on Education and Training on November 7 & 8. We are expecting 20 Apprentice Schools from all over the world to be represented in this important conference,” she added.