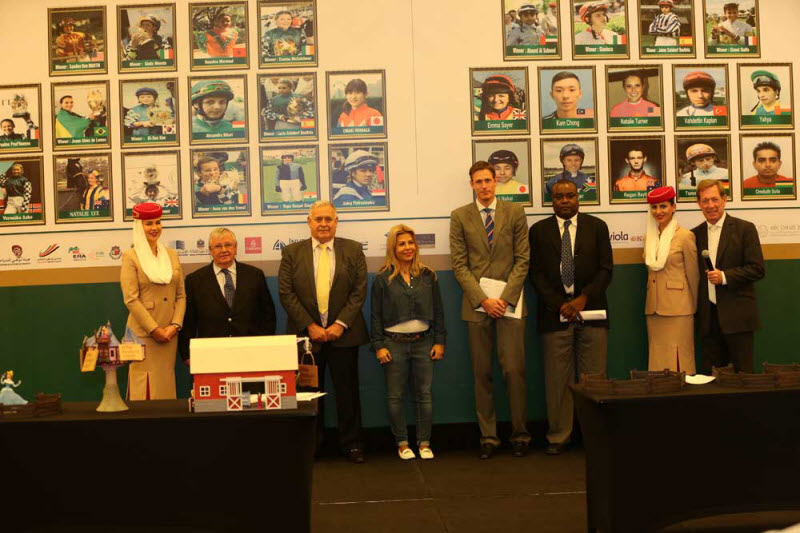 Sha’red, a 4-year-old colt owned by HH Sheikh Mansoor bin Zayed Al Nahyan, UAE Deputy Prime Minister and Minister of Presidential Affairs is rated 105, one more than the Eric Lemartinel-trained Bigg N Rich which will be in the hands of Belgium’s Anna van den Troost.

Strong contenders and professional jockeys Jeane Alves De Lemos of Brazil and Indian ace Rupa Narpat Singh were left to partner lesser fancied horses in the mile’s turf contest which will has a prize fund of Dh 200,000 on offer and will bring the curtain down on one of the most keenly-fought ladies championship.

Eric Lemartinel-trained Raked will be steered by Japan’s Chiaki Wanaga with 294 wins from 3323 races while the experienced Dutch jockey Jadey Pietrasiewicz with 102 wins will be on Ernst Oertel-trained Molahen El Alhan.

The Majid Al Jahouri-trained Awam will be partnered by French jockey Pauline Prod’Homme with 61 career wins while the Helal Al Alawi-trained Kanjani will be ridden by Hungary’s Alexandra Bihari with 23 career wins.

Korean Keum Joo Lee on the Majid Al Jahouri-trained Laamma, Great Britain’s Alyson Deniel on the Lemartinel-trained Mandragore Al Maury, the Jaber Bittar-trained Ragdan under Australian Natalie Lye and yet another Lemartinel-trained runner -Naseem Al Reef- will be the mount of Moroccan Marmoul Bouchra to complete the 16 horse field.

“Today is a historic day for lady jockeys as for the first time we will have a field of 16 runners competing in the final of this great series in the name of the Mother of the UAE and the World, Her Highness Sheikha Fatima bint Mubarak, Chairwoman of the General Women’s Union, Supreme President of the Family Development Foundation (FDF) and Head of the Supreme Council for Motherhood and Childhood,” Ms Sawaya said.

“At today’s draw I would like to thank all the owners and trainers who have had faith in these lady jockeys and the Apprentice jockeys and provided their horses in these two races,” she added.

“Thanks to the support of HH Sheikh Mansoor bin Zayed Al Nahyan, we will see around 135 flat race jockeys and around 40 endurance riders attending this week’s grand finale under the name of ‘One World, 6 Continents’ which extends until November 9,” she added.