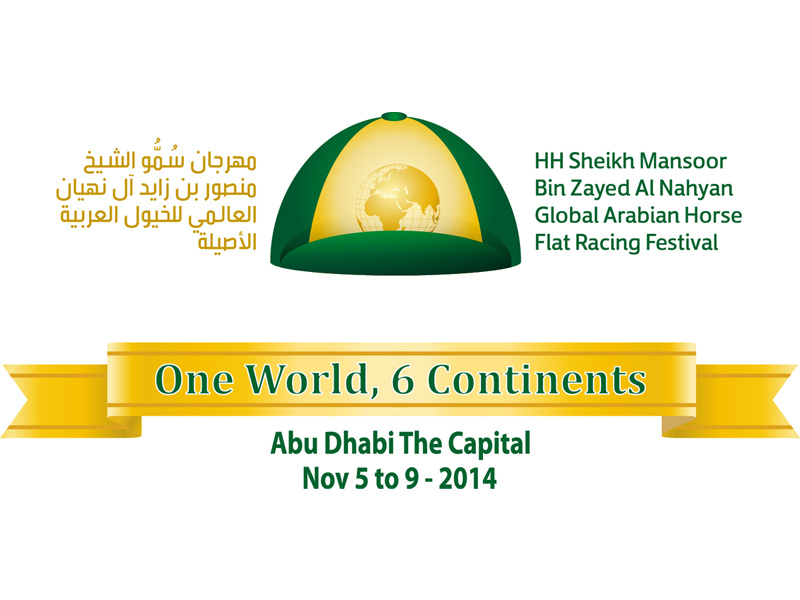 Over 800 members of the Purebred Arabian Racing fraternity representing 56 countries have arrived in Abu Dhabi, the world capital of Purebred Arabian racing to celebrate ‘One World, 6 Continents’ until November 9, 2014 to mark the end of the HH Sheikh Mansoor bin Zayed Al Nahyan Global Arabian Horse Flat Racing Festival‘s activities for 2014.

In his welcome message, HH Sheikh Mansoor bin Zayed Al Nahyan said, “It gives me immense pleasure to invite you all to what will be a truly fitting finale for an event-filled season that culminates in ‘One World, 6 Continents’ event.”

“The Festival is all set to once again end a significant period of activities which has brought together all members of the Purebred Arabian Racing fraternity as ‘One World’ to Abu Dhabi – the Arabian Horse Racing Capital of the World,” he said.

“In this year’s Festival, the endurance race series in the name of HH Sheikha Fatima bint Mubarak ensured UAE riders including ladies and others from the world over took part in the series which visited several European venues as well as the UAE.”

“We extend, in the true and traditional style of Emirati hospitality, a hearty welcome all members of the Arabian horse racing fraternity from all over the globe to ‘One World, 6 Continents’ season-ending events and hope each one of you carry home great memories of your visit to the Arabian Racing Capital of the world- Abu Dhabi,” he said in his message.

“Each passing year has seen the Festival create new milestones in this journey of promoting the Arabian horse, flat racing, endurance and allied activities. The Festival’s events held all over the globe have left an indelible mark for this fascinating sport while here in the UAE Abu Dhabi has grown into what is considered in the equestrian world as the Purebred Arabian Racing Capital of the World,” he said.

“Through the flat races series and endurance rides the HH Sheikh Mansoor bin Zayed Al Nahyan Global Arabian Horse Flat Racing Festival has been able to successfully showcase the skills of the Purebred Arabian horses while the world class conferences and awards ceremonies have given the much needed impetus to the sport,” remarked HE Jasem Al Darmaki, Acting Director General, Abu Dhabi Tourism & Culture Authority.

“The Abu Dhabi Tourism & Culture Authority joins the Festival in welcoming each one of you and hope your love and concern for Arabian racing will be further cemented and result in a boost to its progress.” he added.

HE Mohamed Ebraheem Al Mahmood, Chairman, Abu Dhabi Media said in his message “Both the national as well as the international media have accorded the HH Sheikh Mansoor Festival’s activities exhaustive coverage as have the specialized media for horse sport. The live TV coverage as well as the live on-line streaming has ensured that the UAE’s focus on Purebred Arabian horses and the activities of the Festival have reached far and wide.”

“The ADSC is moving on steadily in cementing the name and image of Abu Dhabi as a highly distinguished sporting and tourism destination and in this regard the Festival has been a perfect event that has played a major role in putting Abu Dhabi on the world sporting map,” he added.

HE Noura Al Suwaidi, Noora Al Suwaidi, Secretary General, UAE General Women’s Union said, “At the very outset I must say that the recent season or calendar of events in the HH Sheikh Mansoor has been a significant one as far as lady jockeys and lady endurance riders are concerned”.

“As directed by Her Highness Sheikha Fatima bint Mubarak, Chairwoman of the General Women’s Union, Supreme President of the Family Development Foundation (FDF) and Head of the Supreme Council for Motherhood and Childhood, we are proud to be involved with the activities of the HH Sheikh Mansoor bin Zayed Al Nahyan Global Arabian Horse Flat Racing Festival,” she said.

Meanwhile the guests attended a Camel Race at the Al Wathba Came Racing track and then were treated to a grand Welcome Dinner.

The two-day HH Sheikha Fatima bint Mubarak Conference for Education and Training will start tomorrow from 10.00 am onwards.