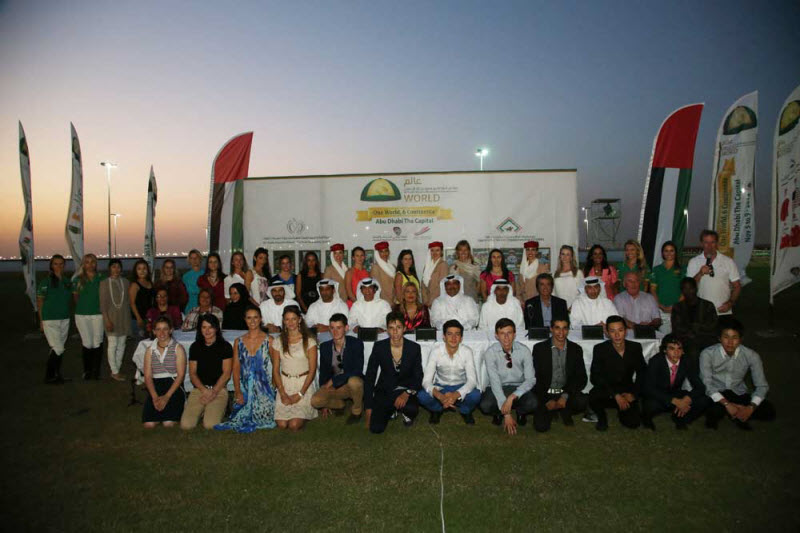 The Purebred Arabian Horse Racing fraternity, assembled in Abu Dhabi for the finals of the HH Sheikh Mansoor bin Zayed Al Nahyan Global Arabian Horse Flat Racing Festival events, got a sneak peek of the Sheikh Zayed Heritage Festival, which will now be held over a 20-day period starting from November 20, 2014.

Along with this announcement of the much-awaited Sheikh Zayed Heritage Festival, Ms Lara Sawaya, Executive Director of the HH Sheikh Mansoor bin Zayed Al Nahyan Global Arabian Horse Flat Racing Festival and Chairman of Ladies Racing Committee in the International Federation of Arabian Horse Racing Authorities (IFAHR) and Chairman of Apprentice Jockeys & Racing in IFAHR, made further announcements at a press conference and later at the Gala Welcoming Dinner held in the middle of the desert in Al Wathba region.

Confirming the Triple Jewel leg for the US part of the Sheikh Zayed bin Sultan Al Nahyan Cup like the Triple Crown of the same series currently being held in Europe, Ms Sawaya also announced a boost to the HH Sheikha Fatima bint Mubarak Apprentice World Championship (IFAHR) series which will now stage nine races in 2015.

Ms Sawaya also announced the inclusion of the Italian Endurance Festival under the umbrella of the HH Sheikh Mansoor Festival from the coming year.

Meanwhile, two-day HH Sheikha Fatima bint Mubarak Conference for Education and Training began today and continues on Saturday before the grand finals of the Festival’s flat races on Sunday.

“There are exhibits too from the General Women‘s Union and the Zayed Higher Organisation for Humanitarian Care. The Festival also promises a major fireworks show and a concert with top Emirati and Arab performers on the opening night,” she said.

“We are all inspired by our father, the late Sheikh Zayed bin Sultan Al Nahyan,” Ms Sawaya added during a brief visit to the ad hoc heritage village, the venue of the festival.

“Arabian horse races in the UAE date back to 100 years when Sheikh Zayed bin Khalifa brought Rabdan to ink the intro of a fascinating story through which we are sailing right now,” she said while briefing the audience of the Arabian racing legends in the UAE which were bred by late Sheikh Zayed bin Sultan Al Nahyan.

“All-time great Alanudd and Maha set the best example of the quality of breeding that has characterized the industry by that time. They are the grandmothers of the stallions that dominate the breeding world at the stud farms of HH Sheikh Mansoor bin Zayed Al Nahyan, UAE Deputy Prime Minister and Minister of Presidential Affairs in France and elsewhere,” she said.

“Now, HH Sheikh Mansoor is carrying on with the vision and initiative of late Sheikh Zayed bin Sultan Al Nahyan that has paved the way for the successful effort that has been staged to promote this noble creature around the globe,” Ms Sawaya said.

Earlier on Thursday evening, Ms Sawaya addressed an international press conference which was held in the heart of the desert and attended by the IFAHR chief Sami Al Boenain and top officials of the sport and sponsors.

“Inspired by the brilliant initiative of late Sheikh Zayed bin Sultan Al Nahyan, HH Sheikh Mansoor bin Zayed Al Nahyan initiated the Festival which has developed from its humble beginnings with four races in 2009 into a major global umbrella with 90 races that has brought the whole world under one roof. And because of this we are here under the slogan of ‘One World, 6 Continents in Abu Dhabi The Capital of Arabian Racing’ thanks to the foresighted vision and directives of His Highness Sheikh Mansoor bin Zayed Al Nahyan, Deputy Prime Minister and Minister of Presidential Affairs,” she said.

“Regarding the jockeys, specially-made helmets will be distributed free to all jockeys who have arrived in the UAE courtesy of the festival. They will also be provided with credit cards for the apprentice jockeys to buy their requirements as they visit the markets for shopping. The girls are invited to return to Abu Dhabi and attend the HH Sheikha Fatima bint Mubarak Endurance Race for Arab countries,” Ms Sawaya said.

The two-day HH Sheikha Fatima bint Mubarak Conference for Education and Training continues on Saturday before the grand finals of the Festival’s flat races on Sunday.