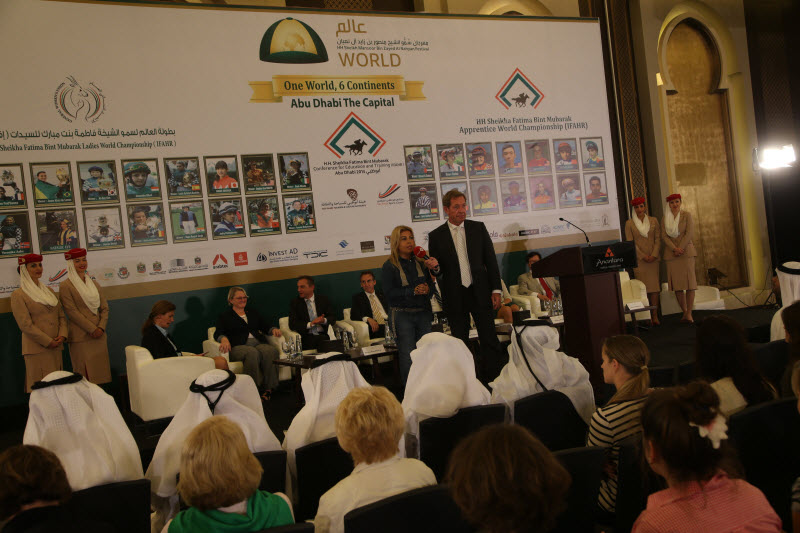 Some interesting facts and finer details concerned with shaping professional jockeys came to the fore on the opening day of the HH Sheikha Fatima bint Mubarak International Conference of Education and Training which got underway at the Anantara Hotel in Abu Dhabi on Friday morning.

HE Aref Al Awani, Secretary General of the Abu Dhabi Sports Club, welcomed the participants and wished them the best in their tough mission to face the challenges ahead.

Mubarak Al Nuaimi, representing Abu Dhabi Tourism and Culture Authority said that they are proud to have 800 guests from around the globe in Abu Dhabi, the capital of the world’s Arabian racing.

“We needed the brilliant vision of HH Sheikh Mansoor and the great imitative of HH Sheikh Fatima bint Mubarak to support upcoming jockeys.

“Such international conferences which attract top experts in different fields of the equine sport give the youngsters more self-confidence and aspiration to realise their dreams and ambitions by developing their skills and talents,” he said. 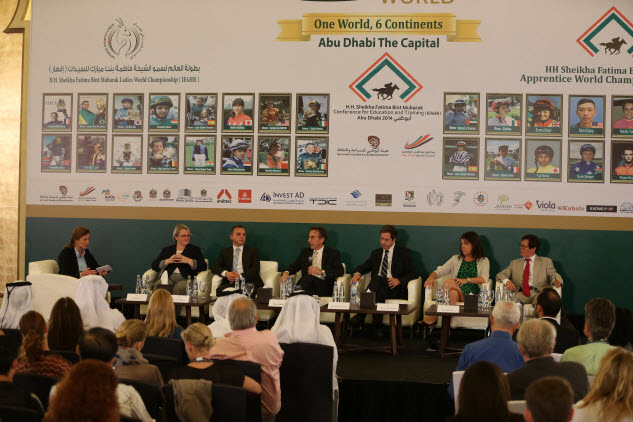 The topics on the opening session included jockey training worldwide and prevention of racing incidents, the jockeys’ high performance athletes at the top, PR and the Media for racing industry requirements and training and education and arbitration.

The speakers focused on the necessity that youngsters should read to educate themselves about training programs for becoming horse racing jockeys, to learn about the skills they need to possess, training requirements and the employment outlook for the field.

The speakers also underlined the role of the training schools to impart ideas on how to ride and acknowledge a horse, understand horse behaviour and have racing experience.

According to the speakers, the most common way to begin is with private lessons, which many jockeys start at a very young age. Related work as a stable hand or in other positions that provide hands-on experience with horses can be helpful, the experts opined.

They also stressed that only a very small amount of college-level programs and courses could help, though they may not be essential for becoming a jockey. Physical fitness and stamina are vital, and prospective jockeys must be keenly aware of the injury risks associated with horse racing.

In order to become familiar with horse behaviour, prospective jockeys may start by taking private lessons through a local stable or join a local club. Many students interested in working with horses start at a young age – sometimes as early as six years old. There are several different riding styles typically offered to students, in addition to basic riding skills, riding students often learn aspects of basic horse care and horse behaviour analysis.

Dawn Goodfellow representing North Racing College noted that there are few universities offer post-graduate certificate, bachelor’s degree and master’s degree programs in equine science or equine business. These programs focus more on the business aspect of horse breeding or racetrack management and less on training to be a jockey.

Other speakers including Kai Schirmann, from the German Jockey School, Remi Bellocq, Christopher Watson, Mellisssa Weatherley, Ku Sun Kim and Yasser Mabrouk highlighted the need for increasing the numbers of the college programs devoted exclusively to training jockeys since they are very few in the world.

Legendary American jockey Chris McCarron said that many potential jockeys begin their career working in horse stables or participating in programs offered through a local club. They may start working as a groom or stable hand, feeding and grooming horses, as well as checking them for health problems, walking horses to cool down after races and cleaning their stalls. With experience, an aspiring jockey can be promoted to exercise rider on a racetrack. Exercise riders warm a horse up in the morning before a race; monitor the horse for behavioural issues and report observed health problems to the horse trainer.