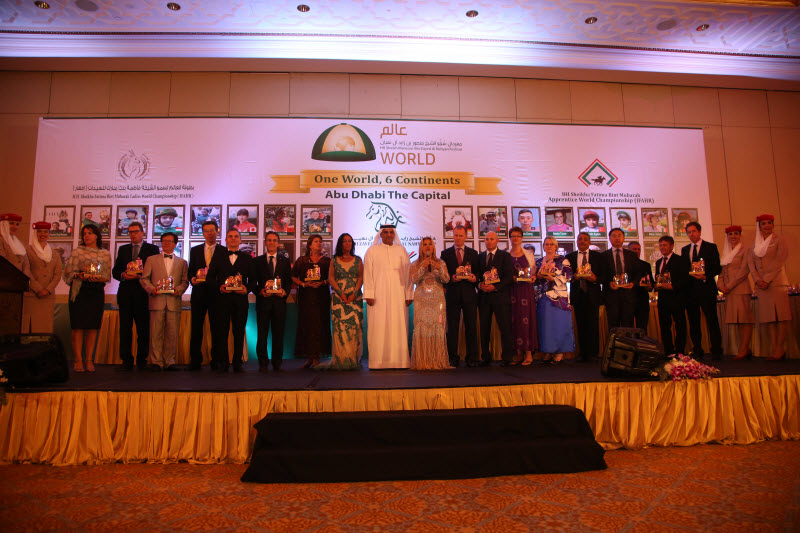 The result of His Highness Sheikh Mansoor’s instructions has now given birth to the International Federation of Horse Racing Academies (IFHRA), a body which will be headquartered in Abu Dhabi, the city which is now come to be recognised as the ‘World Capital for Purebred Arabian Racing.’

Ms Lara Sawaya, Executive Director of the HH Sheikh Mansoor bin Zayed Al Nahyan Global Arabian Horse Flat Racing Festival and Chairman of Ladies Racing Committee in the International Federation of Arabian Horse Racing Authorities (IFAHR) and Chairman of Apprentice Jockeys & Racing in IFAHR, representing Lebanon and the UAE will be the Chairman of the International Federation of Horse Racing Academies(IFHRA) while Susanna Santesson of Germany was named as the Vice Chairman. Ten members were also named and the following is the full list of the new Federation:

The Executive Board of the International Federation of Horse Racing Academies (IFHRA) comprises of :

The Member Countries are:

“We thank His Highness Sheikh Mansoor bin Zayed Al Nahyan, Deputy Prime Minister of the UAE and Minister of Presidential Affairs for yet another ground-breaking initiative and we are all eager to step in and realise the potential of the International Federation of Horse Racing Academies (IFHRA),” Ms Lara Sawaya, the IFHRA Chairman said.

“The main aim is to ensure there is a coordinated effort by the various racing schools and academies, proper communication between them and a focussed effort to shape the young and aspiring jockeys and steer them into the professional world of flat racing,” she said.

After a meeting the IFHRA Board stated that a website will first be established and all details will be circulated in a press release.

According to Ms Sawaya, all IFHRA members agreed that the first order of business will be the creation and establishment of an IFHRA Student Exchange Programme for 2015. “Initial work to sketch out a possible structure of this programme will now be undertaken, including: Number of students per school; Length of mentorships; Estimated costs for travel, room and board per student; Eligibility requirements for students; selection of host trainers; Minimum standards required of students and trainers during mentorship,” she said.

The next meeting of the IFHRA Board has been tentatively scheduled for the month of January, 2015 and will be held in Abu Dhabi, which will be the head quarters of IFHRA.

Commenting on the birth of IFHRA, Jasem Al Darmaki, Acting Director General, Abu Dhabi Tourism & Culture Authority, “This comes as no surprise for under the directions of HH Sheikh Mansoor, the Festival has always been one step ahead in thinking and chalking out programmes and initiatives for the general benefit of Arabian horse racing and its allied activities. We welcome IFHRA’s formation and wish the Board all success in their future activities.”

Sami Al Boenain, Chairman of International Federation of Arabian Horse Racing Authorities (IFAHR) said, “We are truly obliged to HH Sheikh Mansoor Festival and the move to set up this new body is a very big boost for the future of flat racing industry around the globe. I would like to tell the boys to be careful when competing against each other and while they must be keen to win they must also be keen not to do harm to their fellow jockeys.”

Noora Al Suwaidi, Secretary General, UAE General Women’s Union said, “ It’s a great honour for us in the UAE to become the host country of the newly born international body to support the stars of the future as we support the Arabian races in the process.”

Aref Al Awani, Abu Dhabi Sport Council Secretary General said, “We are delighted to see the world coming to Abu Dhabi under one umbrella- the HH Sheikh Mansoor bin Zayed Al Nahyan Global Arabian Horse Flat Racing Festival. Abu Dhabi Sports Council will always support the efforts to bring Abu Dhabi and the UAE to the forefront of the events while promoting our culture, history and heritage around the globe.