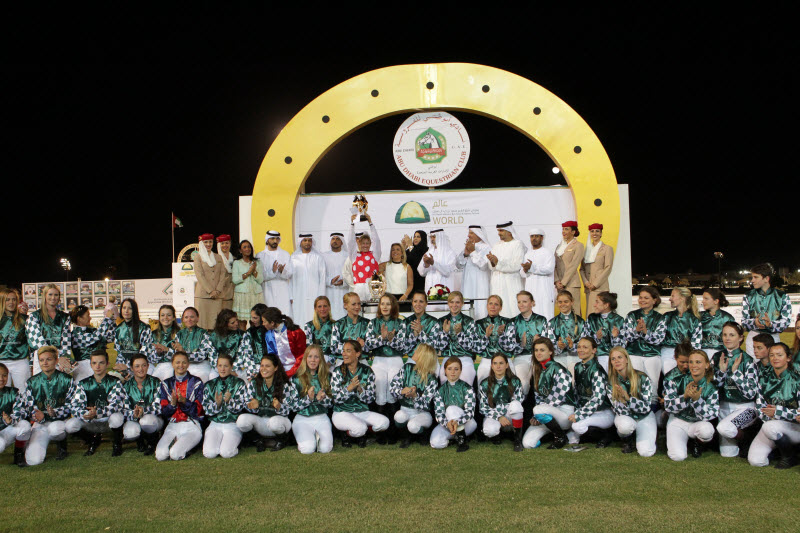 It was the final race of the opening night of Abu Dhabi’s new season. Thirteen lady jockeys from around the globe had earned the right to be here after 13 races held earlier in the year and spread all around the world.

Jadey Pietrasiewicz from The Netherlands, who has been a consistent performer in the Festival’s races in Europe, struck it big when she won the HH Sheikh Mansoor bin Zayed Al Nahyan Global Arabian Horse Flat Racing Festival’s HH Sheikha Fatima bint Mubarak Ladies’ (IFAHR) World Championship on Molahen El Alhan to the delight of the packed stands at the Abu Dhabi Equestrian Club.

It was an almost start-to-finish affair on the Ernst Oertel-trained Molahen El Alhan for the Dutch jockey’s triumph with a Korean, Belgium, Moroccan and Indian lady jockeys taking the next four places

Pietrasiewicz rode a supremely confident race, tracking early leader Laamma before challenging early in the straight. Bigg N Rich under Belgian Anna van den Roost loomed as a big danger but was soon seen off and lost second to Laamma under Korean Keumjoo Lee who ran on again in the final 200m.

Oertel, who had sent out a 1-2-3 in the HH Sheikha Fatima bint Mubarak Apprentice (IFAHR) World Championship, said: “It has been a great evening. We knew this horse had a massive chance as he is improving all the time. You need luck in these races with the draw and we enjoyed a lot – both with gate two and one of the best jockeys in the race.

“I have followed the instructions of the trainer Ernst Oertel and Molahen Al Elhan has never let me down,” said the winning jockey.

“I have decided to ignore my previous performance here to come again to Abu Dhabi, thanks to HH Sheikh Mansour bin Zayed Al Nahyan and the Festival,” Pietrasiewicz said.

The race was attended by HH Sheikh Nahyan bin Mubarak Al Nahyan, Minister of Culture, Youth and Community Development and Chairman of the General Youth & Sports Welfare Authority and other top officials from the UAE and the Arabian racing fraternity.

Ms Lara Sawaya, Executive Director of the HH Sheikh Mansoor bin Zayed Al Nahyan Global Arabian Horse Flat Racing Festival, Chairman of International Federation of Horse Racing Academies (IFHRA), Chairman of Ladies Racing Committee in the International Federation of Arabian Horse Racing Authorities (IFAHR) and Chairman of Apprentice Jockeys & Racing in IFAHR said, “Thanks to His Highness Sheikh Mansoor and Her Highness Sheikha Fatima bint Mubarak, Chairwoman of the General Women’s Union, Supreme President of the Family Development Foundation (FDF) and Head of the Supreme Council for Motherhood and Childhood, Mother of the UAE, these lady jockeys from all over the globe have got this opportunity to race in the series. We are encouraged by the success of all the race series held under the umbrella of the Festival and they will grow in both quality and quantity.”