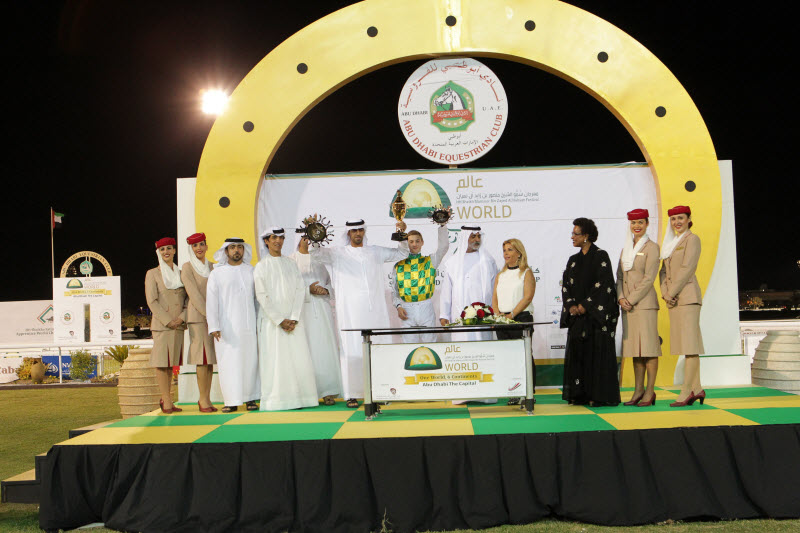 It was a fourth consecutive win for Thakif in the UAE and all under Harry Bentley while for the winning trainer Al Jahouri, it was the perfect start to the Emirati who had won all the Group 1 races for Purebred Arabian horses in the UAE last season.

The large crown, which included a lot of VIP guests and over 800 visitors from the Arabian racing fraternity all cheered as the yellow and green colours of HH Sheikh Mansoor graced the winning post.

Ten may have gone to post but the race only ever really involved the winner, ridden by Harry Bentley, and stable companion Shateh on who apprentice Saeed Al Mazrooei set a strong gallop.

As the field swung for home, Bentley was still sat motionless on Thakif with Al Mazrooei hard at work on Shateh. In behind, the other eight jockeys were all in trouble and Bentley eased his mount to the lead halfway up the straight.

They won comfortably, with Shateh holding on for second.

“This horse has a lot of speed and a bit of class,” said Bentley.

“Shateh went pretty hard up front which has suited me as my horse has won over this trip so stamina was not a worry,” the winning jockey said.

“I was always travelling supremely well and it was a good win. Whenever you ride one for this yard you know you are on a good horse,” Bentley said.

The race was attended by HH Sheikh Nahyan bin Mubarak Al Nahyan, Minister of Culture, Youth and Community Development and Chairman of the General Youth & Sports Welfare Authority and other top officials from the UAE and the Arabian racing fraternity Ms Lara Sawaya, Executive Director of the HH Sheikh Mansoor bin Zayed Al Nahyan Global Arabian Horse Flat Racing Festival, Chairman of International Federation of Horse Racing Academies (IFHRA), Chairman of Ladies Racing Committee in the International Federation of Arabian Horse Racing Authorities (IFAHR) and Chairman of Apprentice Jockeys & Racing in IFAHR said, “It was a great race and a great finish. It was a popular win for HH Sheikh Mansour bin Zayed Al Nahyan, Deputy Prime Minister and Minister of Presidential Affairs, the person who is responsible for all the recent developments and progress in Purebred Arabian racing.”