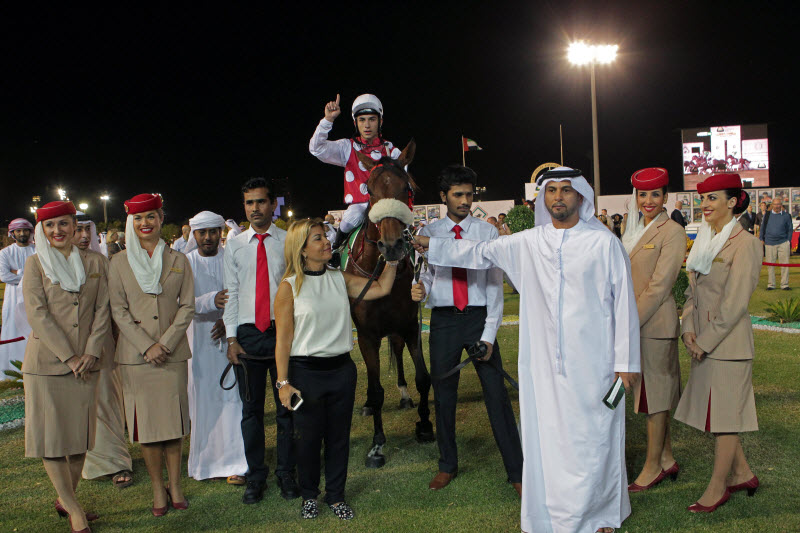 Apprentice jockeys Vahdettin Kaplan from Turkey on Munzade and Frenchman Gianni Siaffa on Najm Alemarat battled all the way to the wire and crossed the finish line together in the 2,200 metre contest which was settled by the judge with Munzade the winner by a short head.

It was a great result to settle the series final held in the name of Her Highness Sheikha Fatima bint Mubarak, Chairwoman of the General Women’s Union, Supreme President of the Family Development Foundation (FDF) and Head of the Supreme Council for Motherhood and Childhood, Mother of the UAE.

Oertel said: “We knew coming into the race we had three good chances and was not sure which was our best hope. To get the first three is great.”

The race was attended by HH Sheikh Nahyan bin Mubarak Al Nahyan, Minister of Culture, Youth and Community Development and Chairman of the General Youth & Sports Welfare Authority and other top officials from the UAE and the Arabian racing fraternity Ms Lara Sawaya, Executive Director of the HH Sheikh Mansoor bin Zayed Al Nahyan Global Arabian Horse Flat Racing Festival, Chairman of International Federation of Horse Racing Academies (IFHRA), Chairman of Ladies Racing Committee in the International Federation of Arabian Horse Racing Authorities (IFAHR) and Chairman of Apprentice Jockeys & Racing in IFAHR said, “This is indeed a fascinating finish to this new series. This year we had four races before the final here today and next year we will see this series grown much larger with nine races on the cards.”