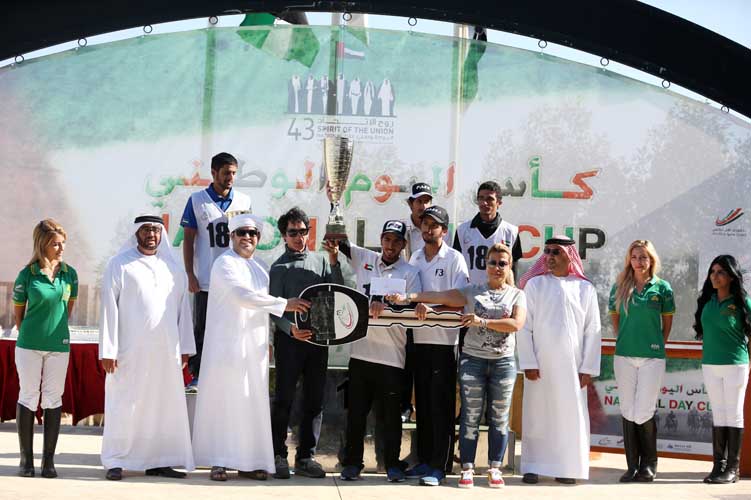 The winner covered the distance in 4 hours, 10 minutes and 39 seconds at an average speed of 28.72km/ hour.

The top 11 finishers drove away the 11 4WD vehicles that were on offer by the Emirates International Endurance Village.

Following his previous wins in UAE, UK and France, the 19-year-old Al Marri said this particular success is very special for him and would like to dedicate his success to His Highness Sheikh Mohammed bin Rashid Al Maktoum, Vice President and Prime Minister of the UAE and Ruler of Dubai and to Sheikh Hamdan bin Mohammed Bin Rashid Al Maktoum, Crown Prince of Dubai.

“I have followed the plan of Sheikh Hamdan bin Mohammed bin Rashid Al Maktoum who was supervising my progress in the race. I have ridden my horse patiently and settled in the middle of the field,” said the winner who was in 36th place after three of the five loops.

“Quran El Ulm is a good horse and I have expected myself to win when I saw my horse showing his stamina in the final two loops. He was picking up very impressively and travelled well to put his head in front on the line,” he added.

Ironically, Al Marri had to lose a few minutes after he has lost the reins before the end of the second loop, but everything was fine thereafter.

Adnan Sultan, Director General of the Abu Dhabi Equestrian Club congratulated their Highnesses the Sheikhs on the successful staging of the endurance race noting that the ideal weather conditions was very helpful for the riders and the horses as well.

Ms Lara Sawaya, Executive Director, HH Sheikh Mansoor Bin Zayed Al Nahyan Global Arabian Horse Flat Racing Festival, Chairman of the Int’l Federation of Horse Racing Academies (IFHRA), Chairman of Ladies Racing & Apprentice Racing Committee in the Int’l Federation of Arabian Horse Racing Authorities ( IFAHR) commented: “The presence of Their Highnesses the Sheikhs have added great value to the race as the UAE celebrates the 43rdanniversary of the National Day. The participation of 164 riders proved once again that the endurance races are fast growing thanks to the support and motivation of HH Sheikh Mansoor bin Zayed Al Nahyan.”

“We are looking forward to host the first meeting of the Int’l Federation of Horse Racing Academies at the Eastern Mangroves Hotel in Abu Dhabi on January 2nd, 2015 to setup and discuss the future strategies and plans of the new body. This will be followed by a news conference the next day to announce the international calendar of the HH Sheikh Mansoor bin Zayed Al Nahyan Global Arabian Horse Flat Racing Festival for 2015,” she added.
Sheikh Hamdan bin Suroor Al Sharqi of Invest AD, Saif Al Awani of Al Awani Group and Abdul Rahman Al Rumaithi also attended the prize giving ceremony.