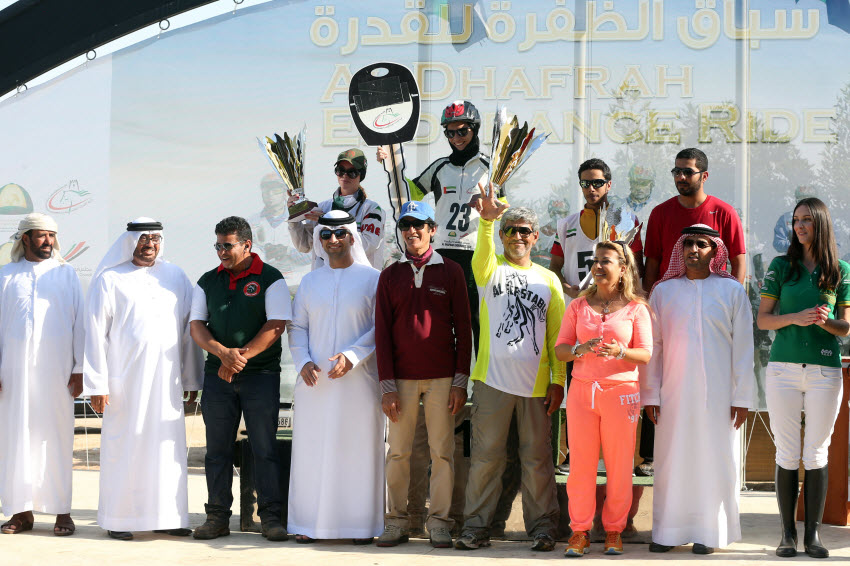 The winner covered the distance in 4 hours, 25 minutes and 34 seconds at an average speed of 27.112 km/hr to finish 17 seconds ahead of the French contender Maedve Valentin from Al Wathba Stables while the UAE’s Salem Hamad Saeed Al Kitbi from Al Asifa-2 Stables was third. It was a challenging event as only 12 riders out of 211 completed . The top nine finishers drove away nine 4WD brand new vehicles provided by the organizers.

“I’m truly delighted to win this well organised competition despite the tough challenge that I have been facing from the two riders who were second and third. I would like to thank Abdulla Hassan Al Hammadi, Al Reef Ajab Stables trainer for his hard work to prepare the horse in a very good shape,” the winner said later.

Al Hammadi noted that Pinol was riding patiently and followed the instructions to keep the horse fit all the way.

Miss Lara Saway commented: “The directives of HH Sheikh Mansoor bin Zayed Al Nahyan to increase the numbers of races at the Emirates International Endurance Village as well as the value of the prizes both in cash and in kind have contributed to the increase in the numbers of participants. Accordingly, we have more good horses prepared by more experienced trainers. The riders have also benefited from this by gaining more experience and exposure to keep them fit to represent the country in the international competitions under the umbrella of the festival.