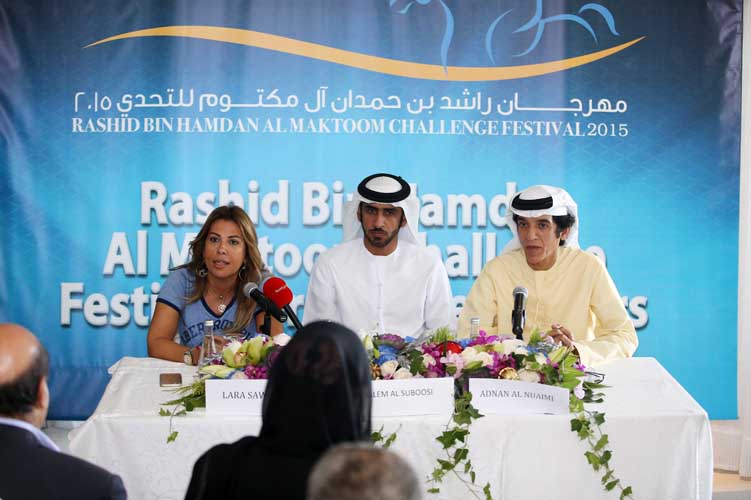 Abu Dhabi – Stage is set for the Sheikh Rashid bin Hamdan Al Maktoum Challenge Festival For Private Owners, a CEN 120km Endurance Ride to be held at the Emirates International Endurance Village in Al Wathba on Saturday, it was announced during a special news conference at the Eastern Mangroves Hotel Suites-Abu Dhabi by Jannah here on Tuesday.

“The event is held under the directives of the HH Sheikh Hamdan bin Rashid Al Maktoum, Deputy Ruler of Dubai and UAE Minister of Finance with over 100 riders in the fray and carries a total purse of Dh1m in prize-money to be distributed among all riders who complete the race plus a brand new Lexus car to be driven home by the winner,” said Adnan Sultan Al Nuaimi, director general of the Abu Dhabi Equestrian Club.

“We have been working hard to implement the directives of the HH Sheikh Mansoor bin Zayed Al Nahyan, UAE Deputy Prime Minister and Minister of Presidential Affairs and Chairman of the Abu Dhabi Equestrian Club to complete all arrangements for this race in order to reflect the bright image of the UAE as a major venue for international endurance rides,” Al Nuaimi added.

“We have introduced for the first time the 40km distance in a move aimed at renewing the routes of the endurance rides,” Al Nuaimi clarified.

Salem Al Subosi, racing manager of the HH Sheikh Hamdan bin Rashid Al Maktoum said: “We are truly delighted to stage this annual event under the directives of HH Sheikh Hamdan to support and encourage small owners within the UAE as part of the national campaign to boost Arabian horse races at all levels.”

“Sheikh Hamdan bin Rashid Al Maktoum has been present all the time with his horses in the events which are staged by the festival and he is the biggest supporter of IFHAR races as well.

“Aisha Al Romaithi, one of the girls who have won the gold for the UAE in Italy represents Seih Assalam stables of HH Sheikh Hamdan bin Rashid Al Maktoum.”