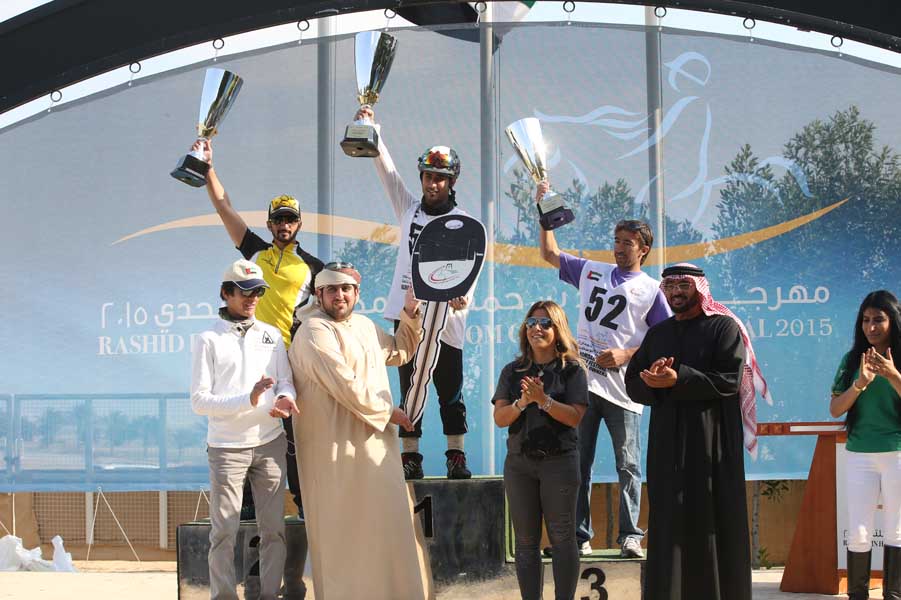 Trained by Ahmed Mahfouz at the Al Hayar Stables, Rowallan made a smooth progress from the 8th position and was in second place after four stages and 104 kms. In the lead at that stage was Rashid Saeed Al Kamda on Baraja. But a steady pace in the final 16-km lap saw Al Naqbi and Rowallan Dee Jay finish ahead of the pack in four hours, 46 minutes and 15 seconds at an average speed of 25.15km/hour.

Al Kamda finished second about two minutes behind while Uruguayan Jonatan Rivera Iriarte on HH Ciabu was six minutes off the pace in third place.

“The race was tough despite the favourable weather conditions,” the winner said later. “The second stage was the most difficult and the speed was lowered because of the sand,” he added.

The trainer added: “We are preparing this horse for future challenges including the HH the President’s Cup. It’s great to see him doing very well in today’s contest.”

Shaikh Saeed bin Hamdan bin Rashid Al Maktoum attended the event and gave away the prizes and trophies to the winners alongside Ms Lara Sawaya and Adnan Sultan, including a brand new car for the winner while the Dh1m in prize-money was distributed proportionately to the riders who completed the race.

“Thanks to his support the stables of His Highness Sheikh Hamdan bin Rashid Al Maktoum have been actively participating both in the Sheikh Zayed bin Sultan Al Nahyan Cup and HH Sheikha Fatima bint Mubarak Ladies World Championship (IFAHR) flat racing as well as the Festival’s endurance rides.”

Regarding the upcoming inaugural general meeting of the International Federation of the Horse Racing Academies, Sawaya said: “Representatives from 17 countries will sit to draft the statutes of the new body among other issues on the agenda. “