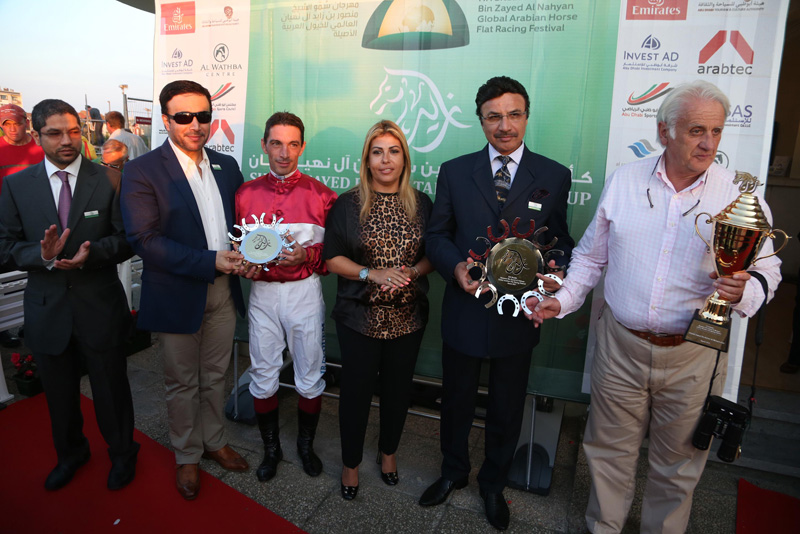 Despite being a working day on Monday, over 10,000 fans turned out for what was an exciting day of racing and the Euros 20,000 Sheikh Zayed bin Sultan Al Nahyan Cup (Listed) race was the feature event.

With 11 strong runners in the 1800-metre turf contest it was once again Jean-Francois Bernard who saddled the winner with Jean-Bernard Eyquem coming up with a perfect ride.

No Problem Al Maury was however challenged strongly by Voyou De Faust, Athlete Del Sol and Gazel T but Eyquem did well to stay ahead and win by over a length in a time of 2:08.19.

“The trainer asked me to just keep him within striking distance and I managed to do that for most of the race. Once we turned for home No Problem Al Maury changed gears and I hardly had to put any effort,” the winning jockey said.

Jean-Francois Bernard, who is no stranger to success in the HH Sheikh Mansoor bin Zayed Al Nahyan Global Arabian Horse Flat Racing Festival said, “It was a strong field but I did have some confidence. No Problem Al Maury ran well and now I am seriously thinking of running him in the big race in Turkey next month.”

“The UAE and Belgium have always enjoyed cordial relations and events like this since last year have further strengthened the bonds between the two nations. It is a pleasing sight to see so many fans cheer and support Purebred Arabian horses which is such an integral part of the UAE’s heritage and tradition,” HE Sulaiman Hamed Al Mazroui said.

The President of the Arabian Horse Racing Club of Belgium (AHRCB) Nelly Philippot-Hermanne said, “This support from HH Sheikh Mansoor Bin Zayed Al Nahyan Global Arabian Horse Flat Racing has come at the appropriate time as this racetrack a huge boost with a new stand and big racing back in action. These races augur well for the Purebred Arabian racing in Belgium.”