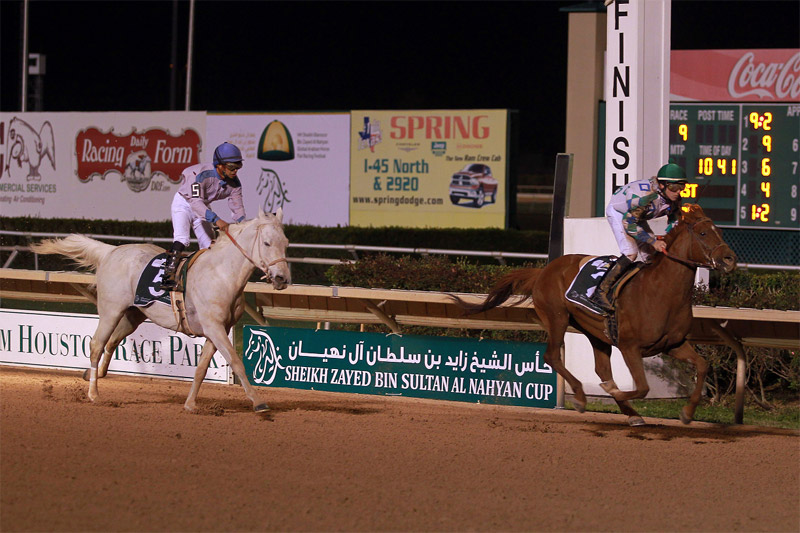 With only three rounds remaining before the grand finale of the HH Sheikha Fatima bint Mubarak Ladies World Championship IFAHR in Abu Dhabi later in November, ten lady jockeys have been declared to battle it out to the wire in the eighth round of the competition which is set to make debut at the Alameda County Fair-Pleasanton Racetrack here on Saturday.

Later in the afternoon, a full field of 12 runners will line up for honours in the sixth round of the Sheikh Zayed bin Sultan Al Nahyan Cup at the same venue.

Both events are held under the directives of HH Sheikh Mansoor bin Zayed Al Nahyan, UAE Deputy Prime Minister and Minister of Presidential Affairs as part of the HH Sheikh Mansoor bin Zayed Al Nahyan Global Arabian Horse Flat Racing Festival. Sheikh Zayed Cup carries a total purse of US$ 30,000 against US$25.000 for the HH Sheikha Fatima bint Mubarak Ladies World Championship (IFAHR) race which makes it the world’s richest ever ladies race.
Heading the weights in the 1200m Sheikh Zayed bin Sultan Al Nahyan Cup is the American-bred veteran horse Ordination. The ten-year-old son of Dormane ex-Ortie has won three of his 13 starts, finished second four times and third in a similar number of events while unplaced in his only last season’s reappearance. The only set back will be the long layoff, but his trainer Helen Shelly looked confident that he has the class to make a strong return to the track.

In the 1200m HH Sheikha Fatima bint Mubarak Ladies World Championship IFAHR, US trainer Scott Powell is looking forward to see his 9-5 shot four-year-old filly Mahra going one better under lady jockey C. Walton after the Burning Sand daughter finished second in her last two starts. But, the immediate threat could be posed by the German Fegentri champion lady Berit Weber aboard Mufv It On Over who was cut to 3-1.

In the meantime, the riders galloped with their horses around the venue early morning on Friday and made positive comments afterwards.

“Although it’s premature to judge the exact position, but hopefuly I will be able to get the job done this time out,” said the British lady rider C. Walton. “I’m the favourite and I want to win this race,” she said.

Stamped as the oldest racetrack in America, the Pleasanton oval plays host to the Alameda County Fair. The racetrack dates back to 1858, when Augustin Bernal, the son of the Spanish Don, constructed it. The track is even older than the famous Saratoga oval in upper New York. The date was July 23, 1939, when mutuel wagering started in Pleasanton. The San Francisco Chronicle reported the occasion by saying, “the revival of East Bay racing will be on the same spot where horse racing virtually had its birth in California more than 70 years ago when the Spanish Dons built the first track here.” In fact, the Chronicle referred to Pleasanton as “the birthplace of horse racing in California.”

The newly renovated Palm Pavillion, is a fair hotspot, with world-renowned cuisine, live blues music and high-definition televisions airing nonstop sports action. The design provides a breathtaking view and easy access to the Clubhouse turn. Casual fairgoers can’t help but be drawn into the first-turn racing.

Gulfnews.com : Darley Awards to be named in Mansour’s honour