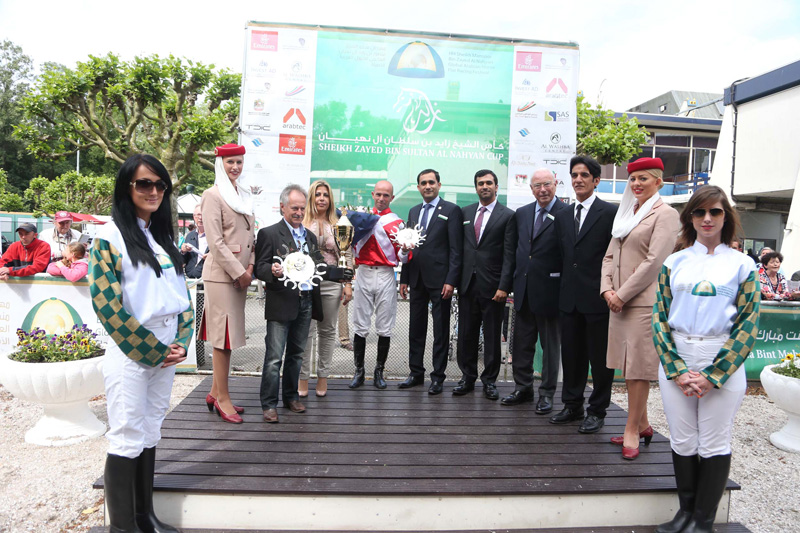 The action then shifted to the lady jockeys who lined up in the prestigious HH Sheikha Fatima bint Mubarak Ladies World Championship IFAHR. Apart from a prize purse of Euros 20,000 the winner of this race secures a berth in the grand final championship race in Abu Dhabi in November and Michala Kucharikova clinched that ticket.

The Slovak lady jockey, riding Phraseur Kossack, cruised home without even using the whip but the winning jockey was dislodged soon after crossing the finish line, but fortunately without any damage.

And Manueddu then completed his double for the day when he steered Alibaba Del Sol to a win in the Wathba Stud Farm Cup race.

HE Abdulla Hamdan Al Naqbi, the UAE Ambassador to the Kingdom of The Netherlands thanked His Highness the President Sheikh Khalifa bin Zayed Al Nahyan and his brother His Highness Sheikh Mohammed bin Rashid Al Maktoum, UAE Vice-President and Prime Minister and Ruler of Dubai and their brothers the Members of the Supreme Council and Rulers of the emirates for their great support and backing for sports in general and horse racing in particular.

“I would like also to thank HH Sheikh Mansoor bin Zayed Al Nahyan, Deputy Prime Minister and Minister of Presidential Affairs and HH Sheikha Fatima bint Mubarak, Mother of the UAE and Chairwoman of the General Women’s Union, Supreme President of the Family Development Foundation (FDF) and Head of the Supreme Council for Motherhood and Childhood, for their initiative to promote the Arabian horse and make our history and culture known worldwide,” he said.

HE Eisa Al Hammadi, Deputy to the UAE Ambassador to The Netherlands said, “It’s the far-sighted vision of our wise leadership that made all the difference.”

“Our embassy is regarded as one of the most active foreign embassies in The Netherlands and we receive preferential treatment from the Dutch authorities. We are very close to the authorities here and the image of our country is well preserved. Many people here have great passion for racing and they always look forward to the Festival’s activities as an important date on their social calendar,” he said.

“The Netherlands is an important venue for Purebred Arabian racing. We have increased the number of the Wathba Stud Cup races to five in Holland and there’s more to come. This afternoon, we have organized three races which were TV streamlined live along with the other trot races by Abu Dhabi Sports Channel. We are attracting new sponsors all the time and there are more sponsors to be announced in due course,” she said.