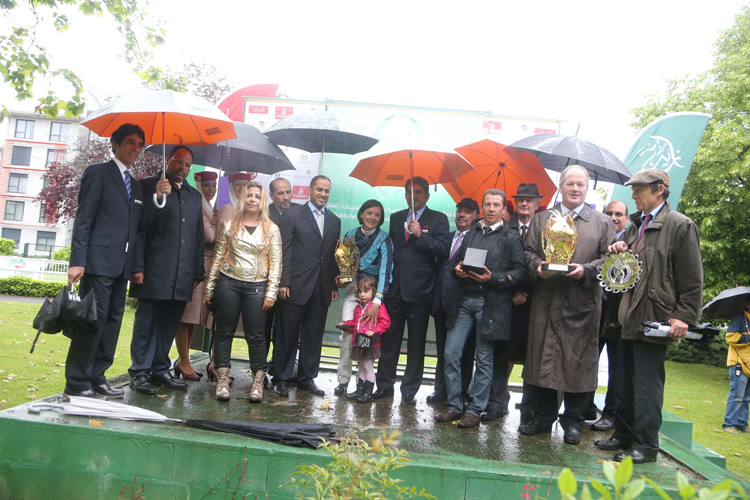 Later in the Festival’s HH Sheikha Fatima bint Mubarak Ladies World Championship (IFAHR) race Artex ridden by Caroline Brunaud finished ahead of the 15 other lady jockeys to win this prestigious race at the same venue.

The two races were held to wrap up what has been a tremendous week for Purebred Arabian racing in Toulouse as the Festival’s three-day conference on World Arabian Horse Racing concluded on Saturday and Sunday’s races were witnessed by a large crown including quite a few UAE envoys to European countries, top connections and officials concerned with Arabian racing despite a rainy day.

Seven horses started in the Sheikh Zayed bin Sultan Cup which has gained a Listed status and with a prize fund of Euros 20,000 on offer some of the best three-year-olds in France were in the fray.

Burj Khalifa under Christophe Soumillon started as the favourite and along with Shar’ed under David Morrison moved cautiously on the track which was soft at places, thanks to the falling rain. Francois-Xavier Bertras then moved ahead on Major but Lady Wish, which was kept in the rear for most part of the race, then answered Mendizabal’s call to win the sixth race of the year in the Sheikh Zayed bin Sultan Al Nahyan Cup series.

The winning margin was a Neck while the winning time for Lady Wish in the 8-furlong race was 1:51.46. Syrianah under Roberto Cartier finished third.

With a record 16 lady jockeys starting in the HH Sheikha Fatima bint Mubarak Ladies World Championship (IFAHR) race, the start was a bit sluggish in tricky conditions. With Euros 20,000 on offer it was the richest race for lady jockeys and soon a keen contest ensued as the group of riders approached the home stretch.

Just when it looked like Iraqi filly Labwah under Ingrid Grard would be the winner, Caroline Brunaud pressed the button and Artex did well to take over and win by a length. Forgehill Cartier, ridden by Alexandria ran third in the 8-furlong race in which only lady jockeys with five or more wins were allowed to participate.

“We thank His Highness Sheikh Mansoor bin Zayed Al Nahyan, Deputy Prime Minister and Minister of Presidential Affairs and Her Highness Sheikha Fatima bint Mubarak, Chairwoman of the General Women’s Union, Supreme President of the Family Development Foundation (FDF) and Head of the Supreme Council for Motherhood and Childhood for organizing these events here in France and this will be another boost to the strong ties the UAE enjoys with France,” HE Mohammad Meer El Raessi, the UAE Ambassador to France said.

“The passion that was evident at the World Arabian Horse Racing Conference here in Toulouse and the success of the two races encourages and keeps us motivated to continue on this path. The Festival will continue to strive and maintain this high standard and reputation that it has earned over the past five years,” said Ms Lara Sawaya, Director of the Festival.