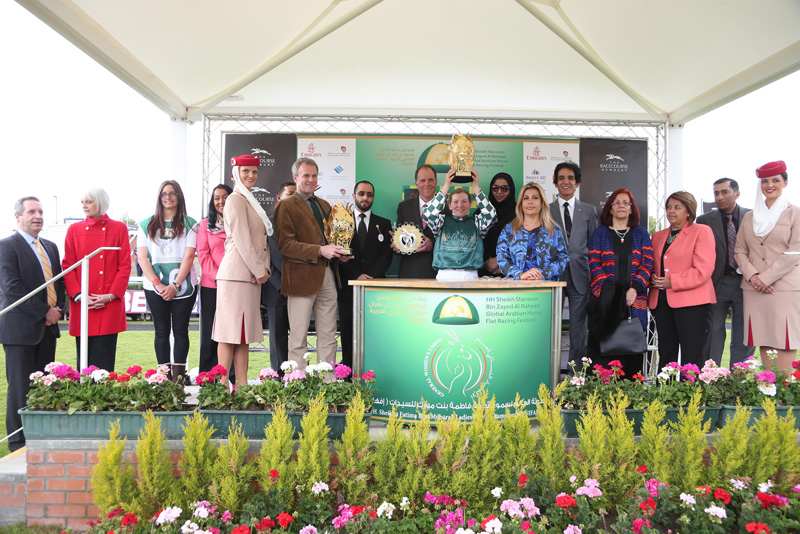 London: Marta Pisarek became the fifth lady jockey to book her ticket to Abu Dhabi for a dream lineup in the final of HH Sheikha Fatima bint Mubarak ladies World Championship (IFAHR) in November, after the Irish woman brought Altesse Kossack home in the UK qualifier of the series at the Newbury Racecourse here on Saturday.

The UK qualifier was staged as part of an eight-race programme which featured the Group-1 JLT Lockinge Stakes and was broadcast live in the UK and the United Arab Emirates via Racing UK and Abu Dhabi Sports Channel as well as on line through the web TV at http://www.sheikhmansoorfestival.com/webtv/.

“This is the most exciting moment of my life,” said a delighted Irish lady jockey later. “Altesse Kossack didn’t break well and I had to push hard to get him right on track. And after the slow start, he began to pick up nicely and did everything right as the horses approached the final two furlongs. I think he’s a very good horse and deserves all credit,” she said. The winner has covered the mile distance in 1:53:65 seconds to prevail by two lengths on the finish line.

Jennie Cook, riding Hajes, looked like a winner in the concluding stages of the race before she was relegated to second close home.

“I hope I will go one better in my next attempt. My horse did a very good job and he was always going well. He was apparently beaten by a better horse,” she said. Hareer walked away with the third place honours under Jessica Macialis to give Omani trainer Salem Al Hakamani a second and third-place finish.

“It was a tough race and the Irish lady made the best of the unfortunate poor finish of my horse after Hajes edged left in the last 100 yards. But, I’m happy with the result and hopefully Hajes would improve over recent form,” the Royal Cavalry of Oman’s handler said later.

Sheikh Mohammed bin Maktoum Al Maktoum, First Secretary at the UAE Embassy in London said: “The support of His Highness the President Sheikh Khalifa bin Zayed Al Nahyan and his brother His Highness Sheikh Mohammed bin Rashid Al Maktoum, Vice-President and Prime Minister of the UAE and Ruler of Dubai and their Highness the Members of the Supreme Council and Rulers of the Emirates is the real boost for the UAE sports in general and the equestrian discipline in particular which enhances the strong presence of the UAE at all international arenas.”

“The staging of such successful worldwide events promotes the UAE ties and serves the bilateral relationships between UAE and UK which exceeds the political and economic links to include the cultural and sports connections among all categories of the two societies,” he added.

Nora Al Suwaidi, director general of the UAE General Women’s Association said: “I would like to thank HH Sheikha Fatima bint Mubarak, Supreme Chairperson of the Family Development Foundation, Chairperson of the UAE General Women’s Federation, Mother of the UAE, for her generous patronage of the championship. The support of HH Sheikha Fatima for the UAE women has enhanced their status and established a strong base for the ladies Arabian horse races worldwide.”

Lara Sawaya, director of HH Sheikh Mansoor bin Zayed Al Nahyan Global Arabian Horse Flat Racing Festival and Head of International Federation of Arabian Horse Racing Authorities (IFAHR) Ladies Racing said: “The race has hit the higher levels of success as reflecte in the huge numbers of racing fans who have turned out to watch the international lady jockeys in action on Arabian horses backs. Furthermore, the online streaming of the race and news conferences enabled the spectators from the US, Australia, Europe and elsewhere to watch the events live as and when they take place.

“The great support of HH Sheikh Mansoor bin Zayed Al Nahyan to Arabian horse races and the backing of HH Sheikha Fatima bint Mubarak, Mother of the UAE, gave us the required push to go ahead,” she said.

Adnan Sultan, director general of the Abu Dhabi Equestrian Club highlighted the contribution of the festival to the development and promotion of the women sports in general and the UAE culture in particular.