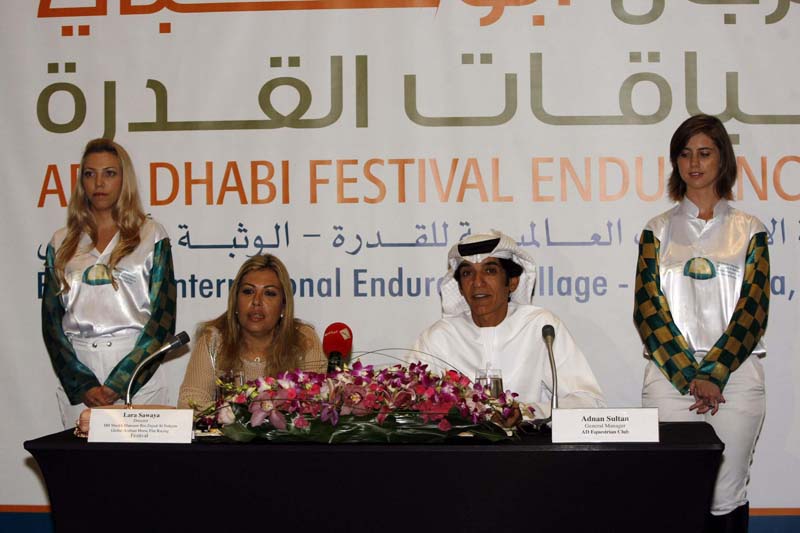 Three endurance rides will be held as part of the inaugural two-day Abu Dhabi Endurance Festival starting Thursday at the Emirates International Endurance Village in Al Wathba, Abu Dhabi with some of the top riders participating.

Sultan Saif Al Nuaimi, Director General of Abu Dhabi Equestrian Club (ADEC) told a press conference at the on Eastern Mangroves Hotel on Tuesday evening, “This is the first time such a festival of rides is being held in Abu Dhabi. We start off with a 140-km Three-star Open endurance ride on Thursday which will be the feature event.”

In the ladies ride on Friday the participants are required to cove the 100 kms divided into four stages of 33 kms , 27 kms, 24 kms and 16 kms,” he said.
The rides are being held under the patronage of HH Sheikh Mansoor Bin Zayed Al Nahyan, Deputy Prime Minister and Minister of Presidential Affairs and Chairman of ADEC.

“This is a great honour to the Festival which is being held under directives and instruction from HH Sheikh Mansoor Bin Zayed Al Nahyan, Deputy Prime Minister and Minister of Presidential Affairs and we are very proud by this endorsement,” she said.

“We are encouraged and inspired to achieve more through the Festival for Purebred Arabians in the future,” she added.

“The HH Sheikh Mansoor Festival will be participating in a series of exhibitions and shows to be held both in Dubai and in Abu Dhabi and we will let people get acquainted both our activities as well as the Purebred Arabian horse,” she added.

In a related development, Ms Sawaya said that two more lady jockeys are being trained by Emirati trainer Majed Al Jahouri and one of them will be seen in action soon. “That brings to three the number of UAE lady jockeys,” she said.