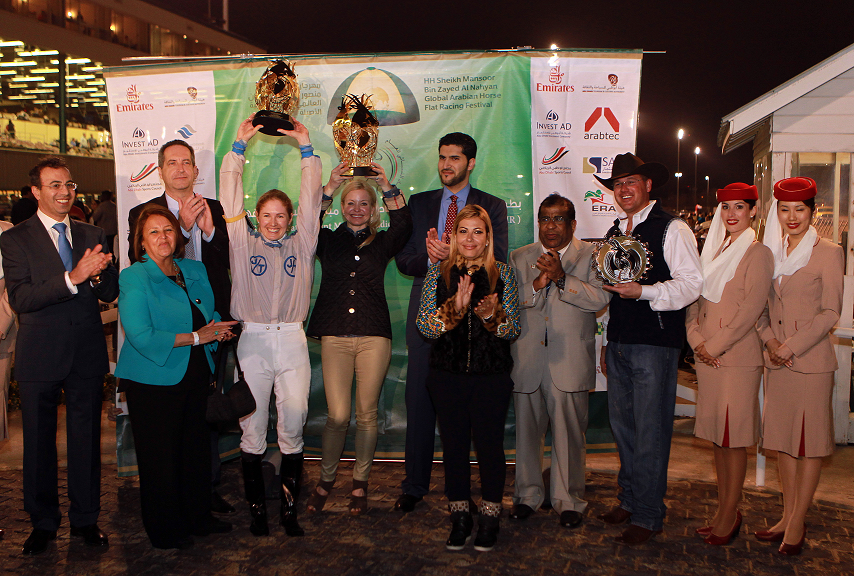 “I have over 50 wins but this is surely one of the best and most cherished. It was my first time in Texas and the HH Sheikha Fatima Cup does give us a great opportunity and I am so happy,” said the 31-year-old jockey.

While an Ostrich Race drew attention, a camel race was equally thrilling and the fans then turned to the Group 2 contest for the Sheikh Zayed bin Sultan Al Nahyan Cup.

In a shock result, the Rita Deleon–trained Krossfire CS won against some fancied opposition which included So Big Is Better and Golly Bret.
Ridden by Contreras, the 4-year-old Krossfire CS posted one of his biggest wins and staved off a late challenge by the fast-finishing So Big Is Better under Ernesto Valdez-Jimenez. Golly Bret, the favourite finished third under Gerardo Mora in the US$ 30,000 Group two event.

“I cannot believe it as it was a strong field. But my horse, it is his fourth win, proved he is improving and now I am looking for some big races from him,” said trainer Deleon, who is also co-owner of the winning horse.

“We thank HH Sheikh Mansoor bin Zayed Al Nahyan, Deputy Prime Minister and Minister of P residential Affairs and Her Highness Sheikha Fatima bint Mubarak, Chairwoman of the General Women’s Union, Supreme President of the Family Development Foundation (FDF) and Head of the Supreme Council for Motherhood and Childhood the Festival for their support to this event which has helped boost ties between the UAE and the US,” Al Jaber said.

“This is a marvellous event and the efforts of the UAE leadership in promoting the equestrian sport and particularly HH Sheikha Fatima’s initiative has helped women in the UAE, Arab and the world to benefit,” said Dr. Badran.

“This year there has been a much larger crowd and the two races were watched and cheered with great enthusiasm by t he fans here. The Festival’s races have grown in stature and today we witnessed some top quality racing action which was a good advertisement for Arabian horses,” said Ms Sawaya.

Abdul Mohsin Al Dossary, Assistant Under Secretary of Sports at the General Authority of Youth and Sports Welfare and Ali Moosa Al Khamiri of Dubai Equestrian Club hailed the progress made in equestrian sport and expressed their satisfaction and pride in the staging of the two races at the Sam Houston Race Park.

“It was a festive atmosphere today and the racing fans here were treated to some exciting fare on the tracks. We are happy to be part of this event,” said Bowey of Invest AD.

Ten cars on offer for two endurance rides over weekend