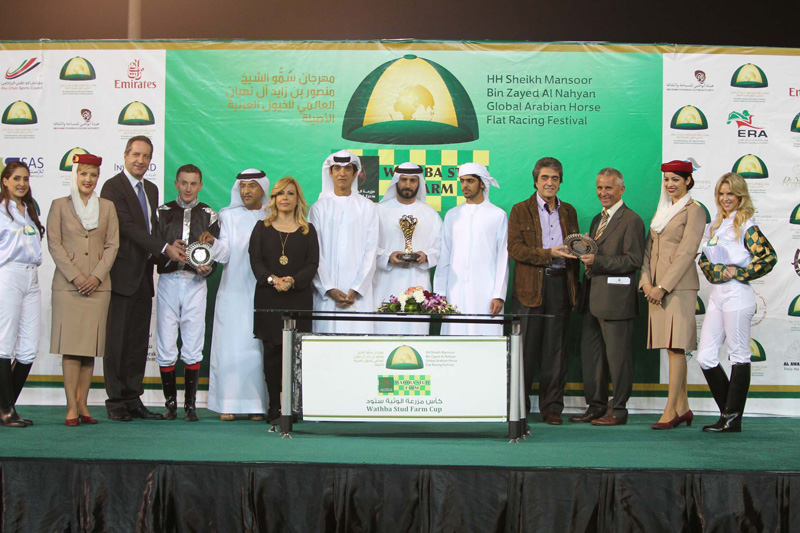 While it was yet another win for the French pair of trainer Eric Lemartinel and jockey Gerald Avranche and owner Khalid Khalifa Al Naboodah, it was only the second win since last season’s success in the same race series.

The 7-year-old chestnut, that had two second-placed runs since that win over a mile, did well to win Sunday’s contest over 11 furlongs with a full field of 16 runners in the fray.

Taking the lead with about 300 metres to go AF Qamoos staved off the late challenge from Unique De La Garde under Royston Ffrench to win by a short head. Joyous Dream under James Doyle finished third.

Commenting on the success of the Festival’s Sheikh Zayed bin Sultan Al Nahyan Cup race on the St Moritz ice tracks, Ms Sawaya said, “It was a great success with about 35,000 watching the action.”

“Equestrianism in general, and Purebred Arabian racing in particular, has been a part of the life and spirit of every Emirati and by promoting this sport globally the Festival seeks to enhance the status of Arabian racing,” he added.

“Under the directives and support of His Highness Sheikh Mansoor bin Zayed Al Nahyan, Deputy Prime Minister and Minister of Presidential Affairs and Her Highness Sheikha Fatima bint Mubarak, Chairwoman of the General Women’s Union, Supreme President of the Family Development Foundation (FDF) and Head of the Supreme Council for Motherhood and Childhood the Festival has achieved tremendous success and we intend to continue and build on this,” Al Muhairi said.