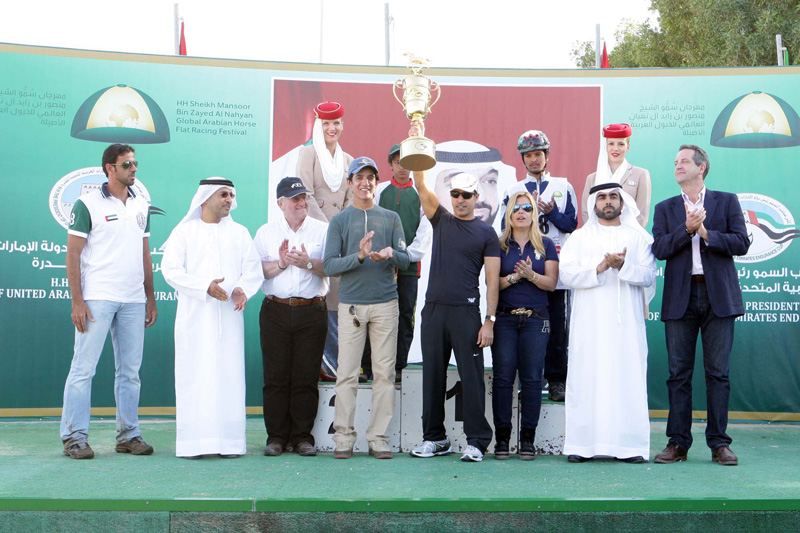 Mohammed Ali Al Shafar timed his run to perfection as he came from fourth place in the final loop to win the prestigious HH The President’s Cup 160-km endurance ride on Orman De Cardonne at the Emirates International Endurance Village in Al Wathba, Abu Dhabi on Saturday.

Al Shafar, who is also the trainer of endurance horses at Al Reeh Endurance Stables, rode the 11-year-old gelding to finish ahead of Khalifa Ali Khalfan Al Jahouri on Farak and Saeed Saqer Mohammed Al Ameri on Eclipse.

The three top riders won a car each for their effort while they along with all those who finished the 160-km ride got a share of the total prize money of DH 1,500,000, one of the richest purse ever for an endurance ride.

“I have won many rides in the UAE but my best performance in the President’s Cup was a fourth-place finish. Now I am very satisfied with this win and it is very close to my heart as it represents HH the President’s name,” said Al Shaffar.

Adnan Sultan Al Nuaimi, Secretary General of Abu Dhabi Equestrian Club, Ms. Lara Sawaya, Director of the HH Sheikh Mansoor bin Zayed Al Nahyan Global Arabian Flat Racing Festival and Head of Ladies racing in IFAHR and Ian Williams of the FEI along with other representatives from sponsors gave away the trophies to the winners.

Gulfnews.com : Darley Awards to be named in Mansour’s honour