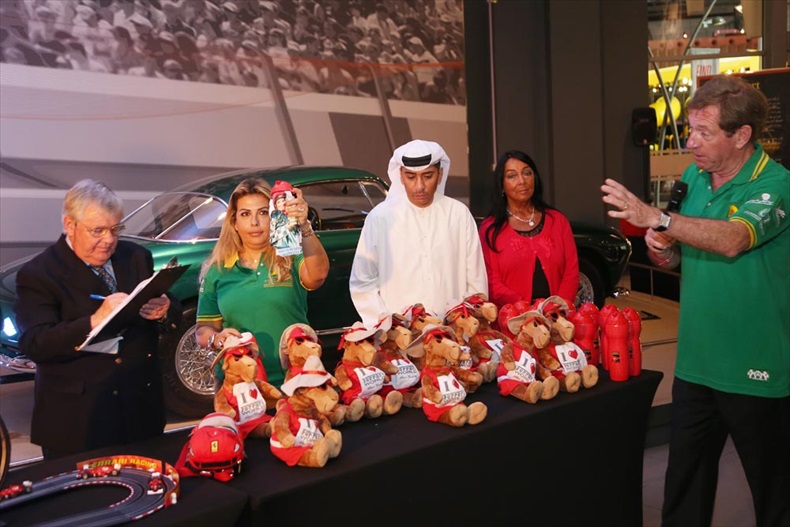 The draw ceremony for both competitions was held on Tuesday at the Ferrari World at the Yas Island in Abu Dhabi as part of the fifth anniversary of the HH Sheikh Mansoor Bin Zayed Al Nahyan Global Arabian Horse Flat Racing Festival which hosts as well the final round of the Sheikh Zayed bin Sultan Al Nahyan Cup (Prestige) under the slogan of One World Five Continents Abu Dhabi 2013.

Australian jockey Nikita McLean, who have won the opening leg of the competition in Oman, will partner MH Wafi and will jump from Gate 4, Mestor will be ridden by the Swiss jockey Sarah Leutwiler, the winner of the second round of the competition at the Huston Racecourse in USA, Manuela Slamanig, Austrian champion jockey of the Moroccan third round will jump on Naseem Al Reef, as the Omani lady jockey Salima Al Taleei, winner of the fourth round in Berlin will mount Karim W’Rsan. The other riders are: Eilidh Grant, Stephanie Hofer, Michala Kucharikova, Jemma Marshall, Caroline Brunaud, Maddalena Szabla, Kim Hyesun, Marie Rollando, Marta Oleksy, Leonie Vethaak.

Nora Al Suwaidi commented: “The support of HH Sheikha Fatima bint Mubarak, Supreme Chairwoman of the Family Development Foundation, Chairwoman of General Women’s Union, Chairwoman of Motherhood, Childhood Supreme Council has made all the difference in putting the women sports right on the track.

The Mother of the UAE had shown keen interest in girls’ sport and given it priority. She has sponsored this championship to motivate families to support their daughters in acquiring knowledge and practice horse riding. Her Highness supervised an ambitious strategy to promote the UAE ladies and women of the world at large which was a great success that earned her the appreciation and gratitude of international organisations.”

“I would like also to thank HH Sheikh Mansoor bin Zayed Al Nahyan for his unlimited support for the festival and availing this women demonstration to show the world the positive indication of the women’s role in the society and I wish the festival all the best,” she concluded.

Lara Sawaya said: “The draw ceremony was conducted in the most advanced and civilized manner at the Ferrari World. This is the most just and fair criterion to make everyone happy and satisfied whether drawn perfectly or widely. Arrangements have been completed to host 14 riders who make the lineup in the final leg of the Mother of the UAE Mundial in Abu Dhabi, the capital of the UAE ladies races. This is in addition to 11 international riders from both sexes who will compete in the second edition of the apprentice jockeys. The slogan of the festival is ‘One World, 5 Continents Abu Dhabi 2013.”

“The HH Sheikha Fatima bint Mubarak Conference to develop and promote the skills of the jockeys EARS which carries the name of the “Mother of the UAE’ will be the most important event of its kind and among the crucial events which are hosted by the festiva; in the presence of 300 guests from 29 countries,” she said.