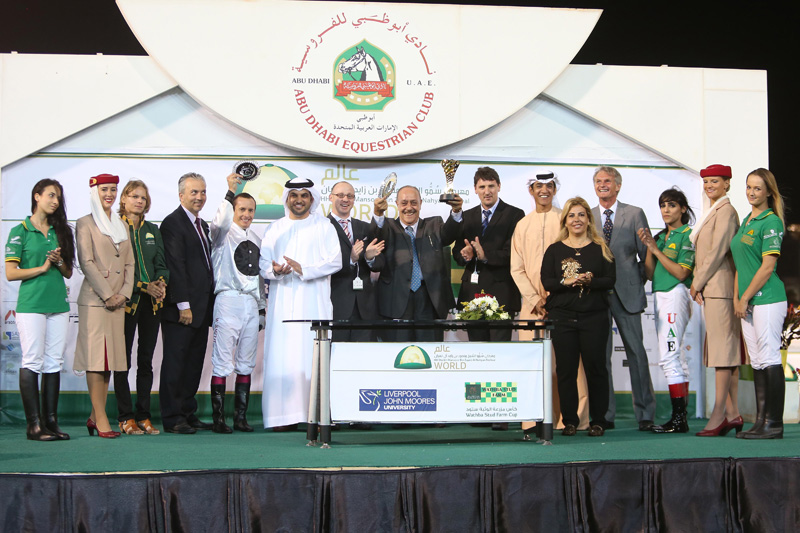 ABU DHABI – Najem S’Heel came with a late run to land the season’s fourth running of the 1000m Wathba Stud Farm Cup For Private Owners Only, the fifth race on the card at the Abu Dhabi Equestrian Club on Sunday night.

Trained by Saifaldin Deep at Al Falah Stables in Sharjah on behalf of its owner Faisal Sameer Al Mahmoud, the five-year-old son of Big Easy produced a dramatic late surge to snatch the verdict in a tight finish. The exciting victory came just 30 minutes after the jockey and the winner’s trainer have been denied with Sahib Du Clos in the feature.

A delighted Lebanese trainer commented: “Najem S’Heel always impresses me in training. He’s working nicely and after his last win in Sharjah we have decided to shift his operations to the turf track in Abu Dhabi and he relished the ground. This was his first win on turf and represented good indication for his future plan.”

Areem retained his Purebred Arabians national Day Cup Gr-1 title which he has won last year for HH Sheikh Mansoor bin Zayed Al Nahyan. The home-bred six-year-old son of Mahabb has once again underlined his status as the best Purebred Arabian miler in the country by winning the National Day Cup for the second year in a row.

Sahib Du Clos chased the winner home under Wayne Smith and Rabbah De Carrere, ridden by Silvestre De Sousa, was a further two lengths behind in third while Shayel Aldhabi, winner of the National Day Cup Prep three weeks ago, was fourth.

Majed Al Jahouri, the winning trainer, said he had given no riding instructions to Ajtebi. “He knows the horse very well and didn’t think it was necessary to tell Ahmed how to ride the horse,” he said. “I got a bit worried when I saw him getting a bit tired toward the end, but still he did the job well. I am sure he will run a better race next time.”

Nawwaar, made all the running to win the Listed thoroughbred equivalent from his more illustrious stable companion and defending champion, Derbaas, for a one-two finish for trainer Ali Rashid Al Raihe and owner Sheikh Hamdan bin Rashid.

The meeting opened with a 1600m conditions race and Harry Bentley produced AF Al Hazer to lead about 100m out and sprint clear from ten rivals to make it two wins from two starts.

Trained by Ibrahim Al Hadhrami for owner, Khalid Khalifa Al Nabooda, the youngster made a winning debut over 1400m three weeks ago and, able to successfully give weight to his rivals here, looks to be improving.

Bentley said: “That was a good performance and he has relished the nice, fast ground. He should improve again.”

Originally a reserve, the Jaber Bittar-trained Sharaf Al Reef made the most of his late invite to contest the following 1600m maiden with Richard Mullen in the saddle. A smiling jockey said: “I was delighted when they phoned me this morning to say he was in because I knew they thought he had a big chance.

“He did it well and I was confident from a long way out.”

The trainer wasted no time on completing a double, this time with Jesus Rosales partnering Ragdan to a last gasp victory in the 2200m handicap. Settled way off the early pace by Rosales, Ragdan produced a sustained run in the straight to lead close home to deny stable companion Monawer.