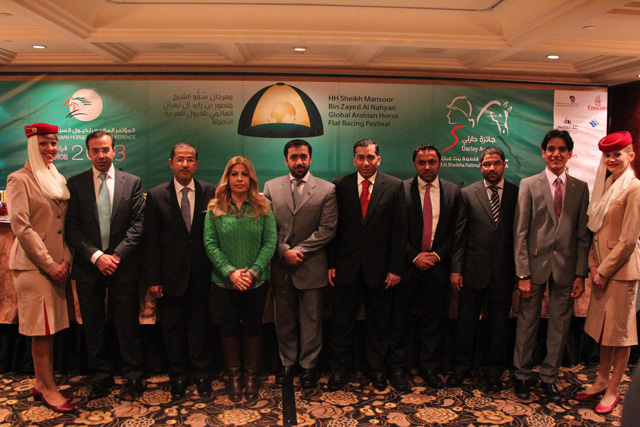 The details of the two events were announced at 1 2:12noon on 12.12.12 at the Four Seasons Hotel in Paris. The news conference to make the announcement has received a strong response from the international media in France and the Arabian horse breeding and racing circles as well since France is one of the main homes of well-bred Arabians in the world.

Lara Sawaya, director of the HH Sheikh Mansoor bin Zayed Al Nahyan Global Arabian Horse Flat Racing Festival and head of IFAHR ladies racing said: “This is a very big and important day in the history of the festival. Under the directives of HH Sheikh Mansoor bin Zayed Al Nahyan, UAE Deputy Prime Minister and Minister of Presidential Affairs, the HH Sheikha Fatima bint Mubarak Darley Awards will be held in its headquarters in US while the fourth edition of the World Arabian Horse Racing Conference is set to take place in Toulouse, France from June 5 to 9, 2013” she said.

“We are truly obliged to HH Sheikha Fatima bint Mubarak, Chairperson of the General Women’s Union, Chairperson of the Family Development Foundation and Chairwoman of the Supreme Council for Motherhood and Childhood‘Mother of the UAE’, and without her backing and support, nothing would have been achieved,” she said.

“We will start the World Arabian Horse Racing Conference with media briefing on June 5, to be followed by three days of discussions and culminates with a big racing day featuring Sheikh Zayed bin Sultan Al Nahyan Cup (Prestige) and HH Sheikha Fatima bint Mubarak World Ladies Championship at the Toulouse Hippodrome on June 9,” she confirmed.

Regarding the prize-giving ceremony of the 2013 HH Sheikha Fatima bint Mubarak Darley Awards, Sawaya said it will take place during the month of March 2013 at the JW Marriott in Houston, Texas.

“Nominations will be received from the IFAHR member countries and they will be processed and coordinated before sending them to the judges. All nominations must be received on or before December 31st and the judges will thereafter determine the winners of the 2013 edition of the prestigious awards,” she said.

“The Darley Awards will make its 26thanniversary of the annual awards since inception by the Arabian Racing Cup. From last year, the event became part of and held under the umbrella of HH Sheikh Mansoor bin Zayed Al Nahyan Global Arabian Horse Flat Racing Festival.
“The HH Shaikha Fatima Bint Mubarak Darley Awards for women associated with Arabian racing around the globe and for the ‘Best Mare’ have added a new dimension to the sport of Purebred Arabian racing,” Sawaya said.

“Earlier, Darley Awards were restricted to the US, but the HH Sheikha Fatima bint Mubarak Darley Awards gave it its global recognition and will always be held in the US,” Sawaya clarified.

“The Darley Awards were founded in 1987 to honour the best in Arabian horse racing and we are now all set to mark its 26thanniversary next year. This distinguished awards ceremony recognizes the most outstanding racehorses, jockeys, owners, trainers and breeders of the Arabian horse racing community worldwide,” she concluded.