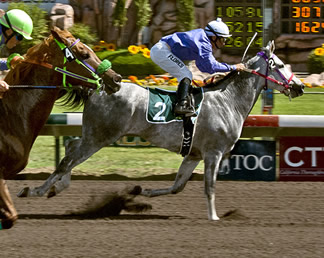 September 29, Fresno, California ~ 10,000 fans cheered on La Jest A Flash in the Wathba Stud Farm Cup second race at the Big Fresno Fair. La Jest A Flash, a grey horse by Fire Mt Flash out of Majestica by *Magnat, paid 10.80 to win and beat out even money favorite NC Casey Jones. LA Jest A Flash owned by Cynthia and Wayne Lipe, trained by Sandy Torok and ridden by Pedro Flores, ran the six furlongs in 1:20.86 and was never headed in the race.

The Arabian allowance race concludes the series of Wathba Stud Farm sponsored races on the fairs for 2012. In it’s second year the Wathba Stud Farm Sponsored Racing Series has proven to be a great success and continues to revitalize the Arabian racing industry in California. The quality of racing has improved along with bottom level purses being raised from 4800 to 6300. Mae Davis, the Arabian Racing on site representative feels confident that increased purses will draw more Arabian stock to California from Texas and Colorado and believes 2013 will be an even better year for Arabian Racing.