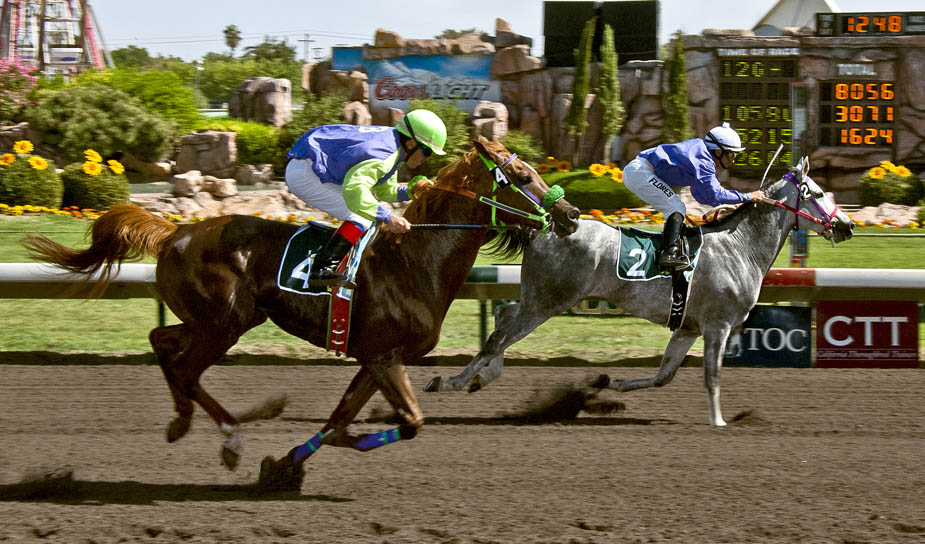 October 6, 2012, Fresno, California ~ 10,000 fans cheered as LA Jest A Flash won the Wathba Stud Farm Cup, the second race on the Saturday card at the Big Fresno Fair. The purse of $8,300, which included the $2,000 added Wathba Stud Farm Cup prize money, was part of the enticement for the field of Arabian runners to come to Fresno.

“In it’s second year, the Wathba Stud Farm sponsored series has proven to be a great success and continues to revitalize the Arabian racing industry in California,” according to California Fairs Director of Racing, Larry Swartzlander. ”The quality of racing has improved, along with bottom level purses being raised from $4800 to $6300. Mae Davis, the Arabian Racing on-site representative, feels confident that increased purses will draw more Arabian stock to California from Texas and Colorado and believes 2013 will be an even better year for Arabian Racing.”

NC Casey Jones with Hugo Herrera up, broke fast from the gate followed by Juicy Pickens with Dionicio Navarro as pilot. French Beat briefly took the lead, but on the far turn it was recaptured by La Jest A Flash and lengthened to 2 1/2 lengths with Juicy Pickens in second and NC Casey Jones running third. At the top of the stretch the Sandy Torok-trained grey colt, in the lead now by 3 lengths, was chased down the stretch by NC Casey Jones, who narrowly finished second. Juicy Pickens closed for third and Burning Speed MKP brought in fourth place.

LA Jest A Flash paid 10.80 to win and beat out even money favorite NC Casey Jones. LA Jest A Flash is owned by Cynthia and Wayne Lipe, trained by Sandy Torok and ridden by Pedro Flores. He ran the six furlongs in 1:20.86 and was never headed in the race.