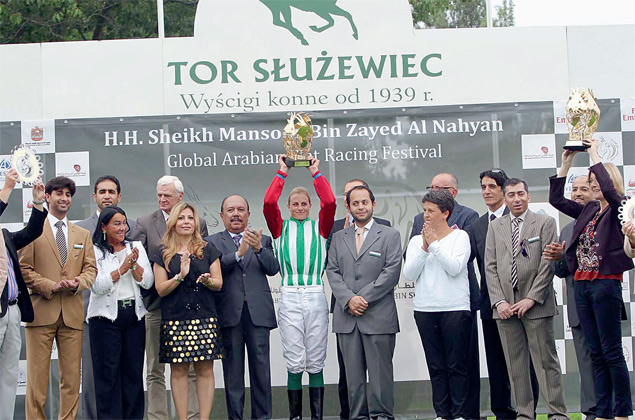 After winning five times in Italy, the son of Amer whose siblings have not been accepted to race as a Purebred Arabian in many countries, was left out of action for over 20 months. However the six year old resumed racing this season and came close twice before finally winning Sunday’s feature race under Italian jockey Mauro Manueddu.

After Dostatok did all the early running, favourite Poulain Kossack under lady jockey Jadey Pietrasiewicz did threaten on the home stretch. But Manueddu brought Amerretto into the challenge and after that there was only one winner.

“We are glad he is back to winning ways. Now we are hoping he will get an invite to the World Cup in Paris,” said Daverio, who is also the President of the German Arabian Racing body.

But the evening’s biggest cheers were reserved for the 12 lady jockeys who had lined up for the Shaikha Fatima bint Mubarak Ladies World Championship IFAHR race. With the world championship ladies race making its Polish debut there was a large turnout and French-based Swiss jockey Katja Markwalder scored a perfect win on Celtik.

Celtik under Markwalder won by over five lengths from Ganima with another six lengths separating the second-placed horse and Benefis.

“This is a great win and I am happy that now I will get a chance to go to Abu Dhabi for the final race,” said the 31 year-old jockey after Celtik’s win.

“The Shaikh Zayed bin Sultan Al Nahyan Cup has always seen some top quality horses in action while today’s debut of the Shaikha Fatima bint Mubarak Ladies World Championship IFAHR race has thrown up another new winner. The lady jockeys proved that they are equal to the task with their improved display,” said Sawaya.