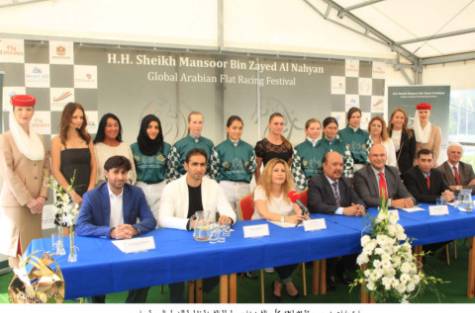 The Polish capital is all set to mark the third running of the prestigious Shaikh Zayed Bin Sultan Al Nahyan – Nagroda Europy (Group 3) race on the same day making it a great attraction for racing fans here in Poland.

UAE rider Shathra Al Hajjaj said she was looking forward to competing with other riders from around the world.

“This is my first time here in Poland and we are all excited about the race. I will try my best and hope I get a good horse. It looks like a very open race,” she said.
Article continues below

“I also would like to thank Shaikh Mansour Bin Zayed Al Nahyan, Deputy Prime Minister of the UAE and Minister of Presidential Affairsm, for bringing the Festival’s activities to Poland. Such events will strengthen the ties between the two countries and boost the UAE’s heritage sport here in the region.”

Lara Sawaya, Director of the Festival and head of IFAHR ladies racing said: “The Festival has now made its presence felt in 13 countries with a total of 64 races in the current season.”

“I urge owners and trainers to enter good horses as this is the richest purse for a ladies race. It will be a big boost to the amateur lady jockeys if they are supported by owners and trainers. The Shaikha Fatima Bint Mubarak Ladies World Championship IFAHR has put Poland on the world equestrian map.

Khalid Hussain, Director of Sports Affairs at the General Authority for Youth and Sports said: “It is a matter of pride that these races are being held here at the Sluzewiec race course and I thank the UAE leadership for this endeavor.”